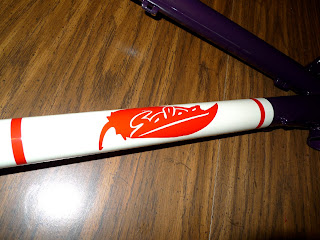 <=== It's here! (Formerly a Superior Blue El Mariachi)
Well, the Gun Kote frame is here and I am excited to be building up another single speed rig. Now mind you- I am taking one apart to get this one together, so it is a legit "add one, take one away" sort of situation, although the one that is being "taken away" might return again someday!
Enough about that. This turned out really neat. I like it a lot. It has a sort of eggplant color in the natural light, but the camera flash brought out the purple. If it's sunny out tomorrow, there may be some glamour shots taken to see how it looks outside. 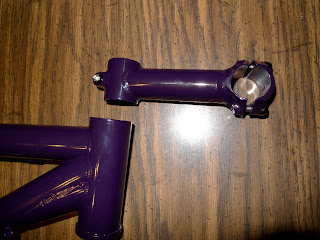 <===The Salsa Cycles CrMoto stem got the Gun Kote treatment as well.
If you haven't been schooled up on Gun Kote, check out this post on it. That should get you up to speed on this amazing frame treatment. I hear it is tough, durable, and actually keeps rust out of the frame as well.
I'll be testing the claims, but some of them are apparently true just from looking at this frame. 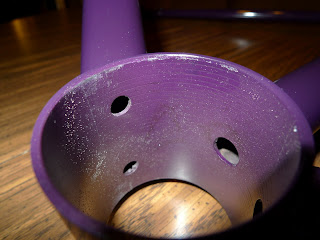 <===Inside the EBB shell.
One of the verifiable claims is that of the thinness of the coating. It is thin! Check out the inside of that EBB shell and you can see the scoring from the previous installment of the Busnell EBB. You can even make out the tooling marks on the shell from the manufacturing!
By the way, there was white dusty stuff from the packing that is showing on the edge there and looks like bare metal. I assure you- it is not! I just didn't notice it until after I took the pic with the flash on, which showed it up. At any rate, it is easy to see this coating is thin, yet they claim it wears like iron. Tough to believe, but I aim to find out! 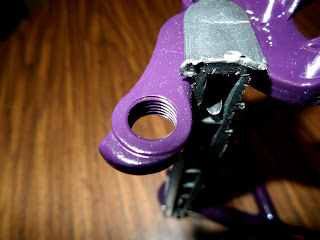 <===Check out those threads!
Another claim is that you do not have to chase out threads, again because of the thinness of the coating. Looking at these derailleur drop out threads, I'd have to agree!
It is a cool product that might revolutionize the way we get frames coated someday. My understanding is that the process is still in evolution and new techniques and effects are being pulled off with this Gun Kote all the time. 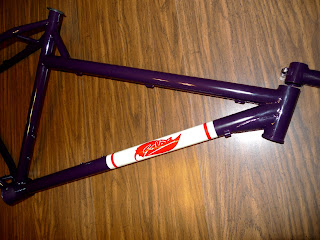 <===And there will be a build going on soon....
Yes, and I will be kitting this out with some cool stuff. I have a White Industries ENO crank set, and I have a Cane Creek short travel Thudbuster seat post coming to test which will go on this initially. I am going to put a suspension fork on it, but the jury is still out on that one. A decision on that will affect wheel choice, and brakes, so I am waiting for those "dominoes" to fall yet.
I suppose a purple part or two might look at home here. That said, I am gunning for Chris King stuff, and the only known available NOS King headset in purple in the world belongs to an East Coast Evil Genius. Knowing his love for all things purple ano, I won't be seeing a purple King headset anytime soon! Not unless I pry it from his cold, dead fingers, or Chris King starts up the magical Purple anodizing machine again. Neither of which are likely to happen. (I like "G" too much to do any harm to him, ya know?)
So the build will likely head in a red ano direction instead. Stay tuned!
Posted by Guitar Ted at 1:00 AM