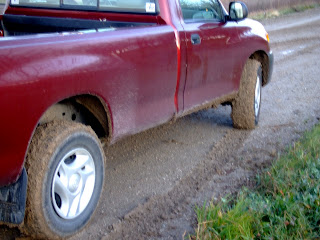 <====Trans Iowa V6 mobile office/recon vehicle will be seeing lots of gravel miles soon.
Note: If you haven't already caught on, I'll be posting regular updates on Trans Iowa V6 of the more "non-official" type here every Friday or Saturday. Just so you know......
Spot Tracking Comments: The jury is still out on this, but I want to thank all the folks that chimed in and gave me their two cents. I really appreciate that. No......really!
You never really know quite how to take comments, since there is no "voice inflection", no emotions attached, so I find it curious how several commenters said something to the effect of, ".....it's your race, run it your way and we'll show up." I get that on a very simple level. T.I.V6 will be run how d.p. and I see fit and you either will come or you won't. Yes. I understand. However; I don't get how that affects you folks opinions on GPS units and specifically using Spot tracking for Trans Iowa. Especially in light of some of the very considered and passionate comments I got otherwise.
It's like if I were to say, "We're going to ram bamboo shards under your fingernails and waterboard you as a qualifier for entry.", and you guys saying, "....whatever! It's your race, etc........" I am just making observations, so don't read too much into this. I just find that part curious.
Other than that, I really do appreciate the comments, I consider all of them, and if I see a trend in thinking, or if I get a well thought out, considered opinion for or against something, I weigh that heavily into my decision making. So, it makes a difference to Trans Iowa and ultimately you- the competitors- if you do chime in.
So, what do I mean in real terms here? What about this issue?
Well, to a commenter, everyone expressed remorse about the "no T.I. Radio" thing. It seems that ya'all got a charge out of it, used it as a sort of "audio post card", or had relatives and friends that thought it was cool. Okay.....point taken.
On Spot Tracking: I didn't get a very positive response to this. I got some very well thought out reasons for not having it, and a lot of ambivalent comments. It seems that this idea is on the ropes from a competitors standpoint. I will say that from a directors standpoint, there is some reasons to desire this. It will be weighed carefully and in light of the T.I. Radio comments. I'll make an announcement around Registration time.
And what of Registration? It will be announced around mid-November. Stay tuned!
Gravel Racing Series: Well, you knew it had to happen sooner or later! Yes, some of the "under the radar" classics are banding together into a series. Mostly located in Minnesota, the Almanzo Gravel Road Series "Race For The Cup" consists of The Almanzo 100, The Ragnorok 105, "The Gentleman's Ride", The Heck Of The North, and the lone Iowa event, CIRREM. (All links can be found for these events from the AGRS site)
Of course, there has been talk of creating a "Gravel Triple Crown" series for several years now, even before a Nebraska based event existed. Now that the GLGA is up and running, the talk of the "Gravel Triple Crown" has resurfaced with Trans Iowa and Dirty Kanza 200 filling out the limestone triumvirate. Of course, it is all just talk right now, but if what I am hearing actually happens? Yeah.......... Crazy stuff!!! And throw into that mix that the GLGA is going to be the "Official Gravel World Championships" , well, things could get "big". And well........I have some reservations about that.
I'll keep it brief and just say that these developments most likely signal a slippery slope downwards. You see it all the time with stuff like this. You can call me pessimistic, crazy, and downright wrong if you want to. I say, let's revisit this in five years and see. I am not saying this is all doomed, just doomed to change, and I wonder if it'll be for the better. I'm not feeling all that great about it sitting here today. That's all I'll say.
Posted by Guitar Ted at 1:00 AM