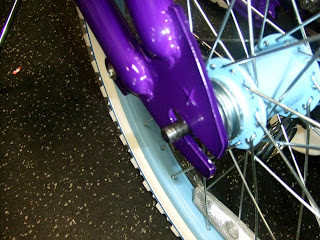 A bike came in recently that the customer was complaining had a training wheel that wouldn't stay on. The bicycle was brand new, from a department store.

What is that? They should have taken it back to the department store to have it fixed? Well, department stores, or as we call them, "mall warts", have no such thing as a bicycle repair man. (Maybe they have some communist scoundrels, I don't know)

But at any rate, there is always more to the story, as we shall soon see.

As the image above shows, there is nary a half an inch of axle sticking out beyond the drop out. Well, you must put in a retainer brace for the training wheel in the track end, and then the actual training wheel goes over that. By this time, you are left with about three threads showing beyond all that hardware. Not nearly enough to get any purchase with an axle nut. No wonder it stripped off!

The thing is, I could have fixed it.  A longer axle would have done the trick. But that would have cost the customer more than he paid for the entire bicycle. But wait...........there is more! 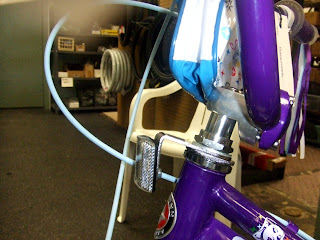 The customer got the bicycle cheaper because it was in the box. Assembly costs extra. So, being frugal, the customer did the assembly themselves.

This might be an option that makes sense for some folks, but for this poor customer, it was a bit of a mistake. Not that having a stem like this on backwards is that big of a deal........... 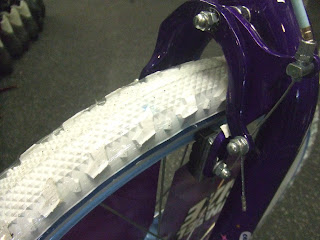 Yeah. This is why no bicycle leaves our shop un-assembled. There was more going on here, but this illustrates my point well, I think.

There is a bunch of good reasons the world has bicycle repairmen.

Finally, I can not fathom why "mall warts" can get away with what they do in selling bicycles to the public. If a bicycle shop did what these places do on a regular basis, just once, that shop would be run out of town and the owner tarred and feathered. That's what gets me about this kind of stuff. That and the poor experiences folks have as a result of this sort of retail model. No wonder people think bicycles are a joke. These big box stores make sure that this perception is well instilled in the populace.
Posted by Guitar Ted at 1:00 AM

Well how else will the box stores get you to buy video games and banquet sized bags of chips? You can't sit on your keister all day eating and get fat if you're outside riding your bike.

I agree! I can't believe they're allowed to sell them! My son has got both of his bikes at my team's shop. Probably paid $40 extra, but it was assembled, made sure it fit him right, etc., Worth every penny of that extra 40. There are some things in life to be cheap about, bikes are not one of them. Especially when your kid is going to be doing God knows what on it! LOL!

Even worse, it appears that the front tire tread is facing the wrong way. The 1st time this little ripper tries to flow into an off camber singletrack corner, they will go down like Frazier. Thus tarnishing the beauty of singletrack in their little head. Ultimately, we lose one to the dark side of the bike paths.

But where else can you get a bike with a cardboard disc in between the spokes!

GT - This is one of the bad things about touting how simple bicycles are. "Any idiot should be able to put one of these together". A double edged sword that leads people to assemble it themselves and not take the time to read the instructions (if they are in English, rather than Mandarin with photos) or do a little research first. The failures of the mall-warts are hidden by the sheer amount of other stuff that they sell that's higher profile.

Bob - Swing that Fargo over here, I'll give you a cardboard circle in that 29" wheel if it will make you feel better. :)

my favorite request still is: can you lock my steering so i can light my cig with no hands on the bars while riding?

In defense of walmart the bike department is one of the departments I supervise. I have 3 experienced bike builders who assemble the bikes. We don't charge for assembly and repair the bike for 90 days after purchase usually longer. I will give you the bike that we are sent are of the lowest quality on the market, however most of or customers will only ride them a couple of times and wouldn't spend 500 dollars on a bike. I also purchase my kids bikes from the locale shops because they are better bikes,

Yup, I'm with you G-T. The first bikes we got for the kids when they were little (4 and 6) were from a box store, and never again! I spent over an hour just doing enough maintenance to make me not feel terrified to have my kid on the ride, and they had coaster brakes!

For the next bike the older kid got, I went to my favorite shop and bought her a Giant Taffy. Best decision ever, she loves it, and it's a well made bike that was serviced to perfection before we walked out the door by good folks. The older boy gets his first "real bike" this year, and he's itchin' - this reminds me. Maybe this weekend I'll take him to pick out something decent of his own.

@Courtney: You don't work in my market area though. I wish you did!

It seems like Wall Marts are very inconsistent in regards to bicycle assemblies and maintenenace. Our customers inform us that the wall Mart here won't touch their new bike purchases, and my inspections of display bikes often reveal similar miscues as I show on my blog today.

Kudos to you and your staff for being more trustworthy. I am afraid you are the exception rather than the rule.

I can't get enough of these shop stories GT! Unfortunately, being a shop alum, I know them all too well.

Saddest part about his is the same yahoo who thinks nothing of rumbling around in a gas guzzling 50K SUV or pickup will quibble over a few bucks that willinsure his kid's safety on the bike.

Just thinking aloud - but most people here can see the parallels between bikes and cars as forms of transport, utility, and sport - but could you imagine selling the general public a 'build your own car' kit?

Now add in a legal climate where people seem to refuse to take responsibilities for their own actions - could the days of big box bikes be numbered?

I, too have taken a quick look and feel at the bicycles in big box stores and usually find the same things you have.

When our fitness (winter time) delivery guys went out on a delivery, they were also amazed at the number of very expensive homes and vehicles with big box store bicycles parked in the garage.