Experimenting: The Good And The Bad 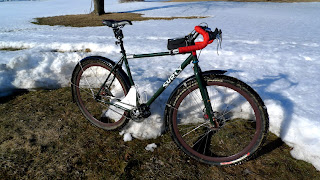 One of the things I got done on Wednesday was to get my old 18 tooth Tensile free wheel back together. It went on the Karate Monkey, and today I rode it into work.

The ride in was punctuated by an axle slippage causing a bit of a mechanical session alongside Highway 63. Good thing I had the ol' Jethro Tool in the bag! I forgot to replace the chain tug somewhere along the way. Bad me! Well, I got it going again, and soft pedalled into work.
I found another cheapo chain tug and installed it to give me some insurance there. I also noted that on the way to work that the chain was crunching and munching the winter grit and DOT sand on the side of the road that is as thick as a Sahara dune. I didn't like the sound of that! 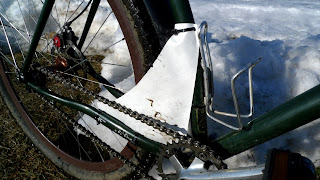 Thanks to the good ol' "inner-webs", I found out something worth knowing about the other day. One of those bits that you think is a good idea, makes you go "huh!" and you file away for later. Well, Thursday was that "later". I had seen a bit about this fellow named Geoff Apps. He had fashioned himself an off road rig that featured a "mud guard". Not any ol' mud guard, mind you, but a mud guard for the chain. Protects the chain from the downward dump of crap off yer back tire.

Well, that crunching and munching gave me an idea to pursue that was directly influenced by this fellow. As you can see in my image, I fashioned a bit of a "mud guard" for my chain that connected to the Planet Bike fender, the chain stay, and the seat tube using zip ties and an old Tyvek race plate. I cut away what wasn't necessary and it worked great! Kept all that muddy crap and sand off my chain and it was clean when I got home. Obviously quieter too. Now it's time to pursue a more permanent fixture! 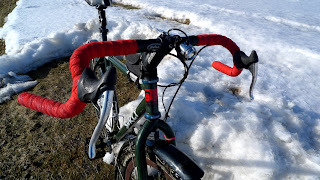 Another thing that was experimented with and failed was that Tensile free wheel.  I can't keep the bearing cover on it, which pre-loads the free wheel bearings. I Loc-tited it, and it still backs out. Good thing I had a fender mount bolt that happened to keep it from coming all the way out and causing a disaster. I won't be riding that rig until that freewheel is disposed of! Oh yeah, this is the same free wheel I mentioned before that froze up on me due to moisture intrusion. I've used it three times with two failures. Not cool.

Now the Woodchippers, well they are stellar. Salsa Cycles did a great job with these. See how the brake levers stay fairly vertical, yet the lower extensions have sweep? This keeps those that love the hoods riding position happy. Believe me, it's the best off road drop bar out there in that regard. The favorite part for me is the extended drop sections with the sweep. Spot on and very comfy for switching up your position with. Thanks Salsa Crew! Mondo control in sketchy conditions while in the drops. Plus, you have that hoods position, and the tops are perfectly spaced and shaped for grinding out climbs on.

You know, you could even hack off some of that lower extension, if you wanted to. That is a great option, and is a heck of a lot easier than trying to make them longer! All in all, it has eclipsed anything out there for off roading, to my mind. I'll have to give the single track action some time, obviously, but I am thinking Salsa has a winner here.

Have a great weekend and ride yer bikes!
Posted by Guitar Ted at 1:00 AM

You need to start carrying your Tomi Cog with you. That would have been a nice "fix" to your freewheel problem.

Too funny! I crack me up man!

Captain- That is exactly what my thoughts were actually.

You are too funny!

Gt. those woodchipper bars are going to be going on a lot of bikes this year. When we saw them at FRostbike I instantly knew that they had solved a lot of issues with them. Did you receive the 31.8 or the 25.4 ??
Ari

that is funny.
kramer guitar

still need to get my bars mounted.

How would the woodchippers work with road integrated shifter/brake levers? My cross bike sees about 40% dirt trails and I'm not overly fond of the standard road bar.

@Nick: I think they would work really well. Again, the lever blade will be very close to vertical, just canted inwards, so I think ergonomically the set up should be fine.

Ben just hooked me up with a woodchipper for my cross bike. so far I love it. the drops are a dream now. these really are well designed bars.

I've been pondering the same thing the past few days, especially now that "The Great Thaw of Aught-Ten" is now upon us. I had first seen something like this on flickr a few months ago.

Likewise. i'll be 'sperimenting a bit with this one this weekend. I'm thinking of using an old bottle from laundry detergent. I also like the mud flap hanging down from this guys crud catcher too...


Also glad to get your comments on the Woodchippers. I'm going to probably need a set of those soon...

How's that head lamp/light hack working? Must be pretty good if it's still seeing dark miles. I have looked at those at Target every time I go in there, thinking I'd buy one if they ever get super cheap. Any long term comments?

@Travel Gravel: It works as good as day one with the caveat that you will need a long throw spot beam to get your high speed safe vision.

This hack has an incredibly wide beam. like ditch to ditch wide! It just doesn't throw down the road far enough for speeds above 13-14mph for my comfort level.

I have toyed with some LED cheapo flashlights that do throw a spot beam way down the road, but don't have any kind of width. The combination of my hack and a helmet mounted spot is killer, cheap, and easy to do.

My hack is an Eveready hat band type camp light, by the way.

Sweet, I need more ditch to ditch coverage. I have a L&M Stella Rush with a real tight center. Good to know.