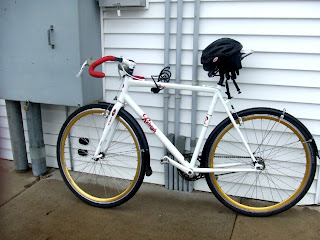 Wednesday. My day off. I had much to do in preparation for my trip to Texas this coming weekend. One of the things I needed to do was to run a quickie errand for some milk to get us by for a few more days.

I chose to ride the Raleigh Rainier single speed cyclo-cross rig which I have fitted fenders to. Oddly enough, the Easton fork has eyelets and the rear drop outs on the frame did not! I found some plastic coated clamps hat got the job done though. Now with some 40mm commuter tires I have the perfect "run to the corner store" rig with my messenger bag "man purse" slung over my shuolder. The errand was a peice of cake! The morning was so foggy today that I ended up getting dripping wet from the ultra humid air though. 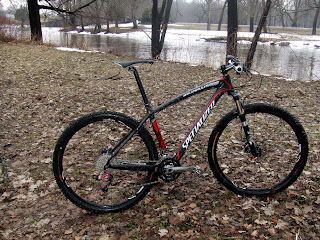 After getting the DT Swiss wheels set up tubeless on the Stumpjumper Carbon Expert, I decided a shake down cruise was in order. So much snow has melted in the last week that parts of a near by park were clear of snow. I decided to run over there and check out the area by taking a nice, high resistance route through soft mud, grass, and left over snow patches.

While spinning along without really paying attention, I was suddenly aware of a bird hopping along on the edge of my peripheral vision. Not being used to seeing such things of late, I looked up and low and behold! If it wasn't about 30 robins that had just arrived from the south. Well, if that isn't a sign of spring, I don't know what is! I stopped and watched them patroling the grassy field for anything to eat for a bit, and then I spun onward.

Not long afterward, I saw a large bird wheeling around above me in the sky. It was a Bald Eagle! I stopped and came to attention, and almost made myself laugh because it was as if I were in the military and had just seen the General walk by! Ha! At ease rider!

So, it was cool to see all that, the snow melting away in rivulets, and the swelling creek with water filled with chunks of ice flowing away. All signs that point to the change of seasons. Signs that point to more bicycle riding real soon.

pelted with snow on the way to work this morn. wet spring snow, but still snow. nice thing is, most of the december snow is gone and stuff is actually drying out slowly...

It's always a good ride when it's graced by a bald eagle. Love seeing and hearing them when I'm close to the rivers around here.

It feels so weird to not come home with frozen feet after a long night ride. I wish all a very good season of riding. Be safe and take care.
Ari

Nice... I had a bald eagle moment recently on a ride too. Those are very cool times.

Even the snow we received yesterday is gone already. Spring has definitely arrived... It's time to ride!