If you live in Iowa, Nebraska, or Wisconsin you've probably already been made aware of the possibilities, (weather guys say it is almost a slam dunk), of a huge snow and wind event that is to occur on Ground Hog Day. It sounds as if this could be a pretty serious blast.

It's pretty funny how the weather has been so strange in many places in the world. It seems that here, more often than not, that our Winters start out mild and tame, then are back-loaded with cold, snowy weather which typically reaches its zenith in February. This Winter season certainly seems to fit that pattern, and last year did as well. However that is, we seem to be headed straight for a big ol' Winter snow storm, the likes of which we haven't had for a few years here.

Then again, you have that odd, seemingly ironic claim by many that when the weather guys say, "not much snow", we get a ton, and when they say, "watch out! it's going to snow a lot!", we don't get but a dusting. I know it seems far-fetched, but everyone here has a story about when that has happened once. I don't know, I suppose that by now you'd hope that science and technology would be allowing more accurate forecasting, and I think it does. I'm pretty sure we're going to be getting dumped on then.

Looks like fat bike season will be getting another shot in the arm and we'll be riding into mid-February, at least. WooHoo! 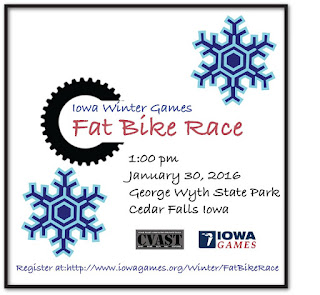 We've got a fat bike race in our own back yard tomorrow over at George Wyth State Park. It's part of the Iowa Winter Games, and I believe things should be pretty fair for conditions then. Yeah.....too bad this wasn't last weekend or next! The snow would have been better, but that's the way the cookie crumbles. They have groomed the course, and are hopeful that it holds up for the event.

Registration on site will be accepted, by the way, as on-line registration has closed.

I suppose many may be wondering if I will be going to race this event. Well, the short answer is "no". I won't be doing this. Long answer: I'm terrible at short events, and the weather looks to be fantastic, 40 degrees and sunny, and a long gravel ride to sneak in a Cup O Dirt Challenge qualifier seems quite possible for that day instead of doing a fat bike event which I won't be good at.  So, I am really hoping to get back on a gravel bike for a ride and to bag at least a metric century before January is done.

Sunday is out. I can't do a longer ride that day since I have my gig at church to play and I won't be done with that until well after noon time. So, I am focusing on getting out early tomorrow and doing a longer ride, hopefully getting done around lunchtime and then having the rest of the day to spend with the family. We'll see how that all goes......

Putting on a bicycle event is fraught with red tape and infrastructure necessities that start to add costs at an alarming rate. Many events that charge an entry fee are raising those fees as a result of rising prices to promoters for insurance and other "unseen features" of events that racers may not be aware of.

At the Iowa race Director's summit, I heard enough  about red tape, risks, and liabilities that made me feel like never putting on a bicycle event again. Really.....it was depressing. You have no idea, unless you have or are promoting a cycling event, what an "onion" an event really is. The layers upon layers of costs incurred make your head spin. Take for instance a well known cross race held here in Iowa that may go to World Cup status this year. The promoter of that event told us his three day event's budget is just into six figures for getting it all together. Six freaking figures folks! That's a complex, monstrosity of an event, yes- but that is a truckload of dollars right there.

I actually found this article, which is written by an event promoter in Arizona, which maybe helps put things into a perspective we all can understand. In the article, the author gives you an item by item cost to put on a criterium for 350 racers. That's a good sized event, but not out of the ordinary by any stretch. Check it out. Then maybe it will be clearer as to what it takes to put on a good event.

One of the commenters on this article made reference to just going out and hitting the gravel. I think that points to a good reason as to why gravel events have taken off the way they have. Costs to put on these events seem to be quite a bit lower with a lot less red tape barring the way as well. It could help explain why both the number f events and why the number of riders riding these events has exploded over the past ten years.

Well, that's a wrap for this week. Get out and enjoy some fresh air, and ride 'em if ya got 'em!

Meteorology/weatherman(woman)....the only job in the world where you can be that wrong that often and still be employed! :)

Hey Mark, let me know if you would like company for the gravel ride tomorrow. I will bring the Fargo!