What I've Learned About Fat Bikes

Okay, I also will add that I am not saying any of this will work for you, but that these are my thoughts on fat bikes. Your mileage may vary....

Many folks have ridden fat bikes for far longer than I have. They have opinions which I have drawn from here, and to some extent, I agree with. But in the end, my experiences may not reflect the vast majority of riders of fat bikes. You see, my intentions for a fat bike are not those many folks have. So, let's start out right there...

I got one of these bikes to ride where I cannot ride easily, or in many cases, at all, on another type of bicycle. Sometimes I ride a fat bike for certain sections of trail or commuting routes because, for those specific sections, I can ride rather than walk or barely ride at all. What this means is that I go do things many people wouldn't do with a fat bike, or attempt on any bicycle. I get my fat bikes dirty, sloppy, and I do things that are darned hard to do from a physical standpoint at times. Take for instance my first image here. That bit of bike trail covered in snow was barely rideable, and was completely taxing, physically, for me to do. So why do it? To learn and thinker out what I might want to do in the future with a fat bike. Like I said, not very many folks are willing to go to these extremes.

I started out on 3.8"ers, like many fat bikers did, but very quickly found the limits of flotation and traction. Look- I am a big guy at 6'1" and 240lbs or so- more with gear, if I have it. So, just like you need a longer, wider ski for skiing if you are big, so too with fat bikes in terms of rim and tire sizing. Well......that is if you really need a fat bike. Groomed trails don't really exist most of the time where I ride, and until this year, never did. Mud, sand, and loose rock? Yeah......not groomed. If you are going "out of bounds" on a fat bike, and if you are a bigger guy, wider tires and rims, like my Blackborow DS has, are often times necessary. Lighter folk need not apply. 4.0's will do you justice, but you won't catch me on those anymore.

In my opinion, in many cases, a fat tire- a "plus sized tire"- is all you really need for much of the mountain biking and sometimes, even snow riding, that one can do around here. I remember riding a 2.4" 29"er tire on 35mm outside width rims on a packed snowmobile trail once during the Winter of 2010, and it was barely punching through. Now with 3" wide, "plus" sized tires? Maybe I could have pulled that off, but, granted, that was a very specific situation for me. 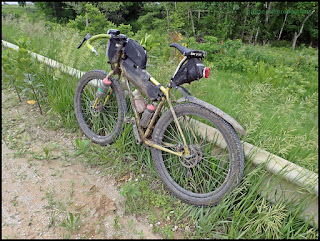 The "plus" sized tires are lighter than fat bike tires are, and in many cases, a better choice than a fat bike. That is, if you don't plan on pushing the boundaries with your bicycle riding.  If you are a smaller, lighter person? Maybe that is all you need. While you can fat bike single track, and it is fun, it is massive overkill. I still do that on occasion, but most of the time I realize I would go faster, with less effort, and arguably have more fun, on a lighter, snappier 29"er or "plus" sized wheeled bike. But hey- if it is your bag, have at it. Fat bikes are bicycles and are fun. I'm just saying that there are better, more efficient ways to mountain bike if you stick to established trails and will never venture beyond that sort of riding.

#3: The geometry isn't dialed in yet-

When fat bikes came out, they were being used for serious, back country expeditions which required a different set of requirements than most riders would need now. Also, one must remember that even the early builders had no idea where fat bike technology would go. Geometry was still a work in progress back then. It still is a work in progress, in my opinion. The main difference is that now we're a lot closer to ideals than we were even a few years ago.

Fat bikes, in 2011 when I got my first Mukluk, were a far cry from the geometry we have today. Many have argued that moving around the main points of fat bike geometry by a mere few millimeters is not significant. However; it has made profound differences in how fat bikes capabilities have advanced in the last few years.

Take, for instance, my Salsa Mukluk versus the Blackborow DS. The Mukluk is harder to shift weight on front to back, it is harder to loft the front end on the Muk, and the Blackborow corners more easily. Fat biking in loose, deep conditions demands that you have a geometry that responds quickly to slight weight shifts, and that can mean the difference between cleaning a section, or dabbing and walking. I don't know about you, but riding- even if it is at a snail's pace- is more fun than walking is. It is my belief that the geometry is getting dialed in pretty close now, but there is another thing happening that might just push the geometry boundaries out even further than they are now.

That thing pushing out the boundaries? Bigger tires. I am a big guy, as I said, and I like going places most bikes cannot with these ginormous tires. However; and this is perhaps just me, the Surly Bud and Lou tires are just falling a bit short at times. Now there are some bigger than Bud and Lou tires out which measure well over five inches wide and have far more volume than the previous "biggest fat bike tires".

These bigger tires are pushing out the standards again, and making frame makers take another look at geometry and style of layout. I'm watching closely, because I can see where I would put these fatter shoes to use, and I would be walking less, going further, and riding in more unorthodox places. That said, I'm not getting rid of my Blackborow DS just yet, and I am not squirreling away dollars for a new, fatter fatty just yet.

What I am seeing though, in regard to these huge tires, is intriguing, and I will be very curious to read and see more of these Vee 2XL tires in the future. Will there be a competing big tire choice? Will these bigger fatter meats catch on and show their worth in powder and muck? I am thinking much more positively about those things than I was early on. Especially for how I like to use a fat bike.

And those are a few things I've learned about fat bikes, and my opinions about them......so far.
Posted by Guitar Ted at 1:30 AM

I am thinking of getting a fat bike. I am about 180 kitted up. I would prefer a plus size tire, but am interested in racing and most Fat Bikes races limit the tire width to 3.7-8 and above.

@Unknown: That's a great point on fat bike racing. If your aim is to ride a fat bike and race, then the 3.8" to 4.0" fat bike is an ideal choice. Keep in mind that most racy fat bikes can easily take a spare wheel set laced up with wide 27.5" rims and mounting fat, B+ rubber gets you a very similar diameter to that of a 3.8"-4.0" fat bike tire with less weight, in general, and a faster, funner ride quality.

Pretty much agreed with everything you said, Ted. I'd also note that I think a lot of these conversations about "what is best" within the context of fat bikes can quckly get marginally useful, if/when people aren't specifically citing the types of factors you mention - rider weight and typical snow conditions for a given area/region being big factors that often aren't identified when someone is proclaiming 'this' tire, or 'that' frame design, etc. to somehow be 'superior.'

It's going to be interesting to see where things go in the direction of even bigger tires than are currently available, and the resulting design tweaks. I do think however, that the range between 4"-5" is going to continue to be the sweet spot for most legit fattie applications, and that beyond this we are really starting to get into a small niche. But then again, maybe these monster tires will just continue to open up a new frontier for those who want to continue to push the boundaries of what kind of surfaces a bike can be ridden on, as fatties have continued to do since their inception. May we live in interesting times for bikes...