With the Spotted Horse off the table as a possibility for me, (See yesterday's post),  the focus has been on trying to take some small steps toward getting my legs and lungs back in to shape for the remainder of the year. I had planned on trying to sneak in a century on the single speed on Saturday but other obligations, long put off, had to take precedence. Plus, a century ride certainly is not a "baby step" towards wholeness! I suppose I should have written off September long ago, but I held out hope even through till the last day.

With the financial set back due to an unforeseen shortfall, I wasn't going to travel anywhere to ride. That's okay as we have the Green Belt right near where I live, and the water is low. Really low right now. That meant that I could pull out the Ti Muk and make a go of circumnavigating the lake out there without going outside the bounds of the normal shoreline.

I'd done this feat once, maybe twice before. It doesn't usually come without the lake being really low because there is one place in particular where the bottom slopes down severely and unless I want to swim, this is the spot I would usually have to retreat above the shoreline's normal boundary. But we've been in a drought the latter half of Summer and this lake is woefully low. Not just this lake either, but all the streams and rivers in Iowa are at, perhaps, all time lows as far as levels go. It's pretty bad around here.

I grabbed the Ti Muk, aired the tires to a good level for muck crawling without sacrificing hard pack performance, (about 8psi or so), and I headed off to do battle with sand, muck, and mire. I approached the lake coming from the North on the Green Belt where I entered the trail at the dog park. Man.......the dog park. I know it is a great resource for the dog owners in the area, but ever since they put that in, the dog walkers on the Green Belt trails have increased by 1000% over the years past.

What gets me is how some of them looked at me with an annoyed look on their face because my presence made them have to stop and restrain their mutts. I call it "The Alone So I Own" attitude. Hey.....even I have suffered that in the past. But whatever. I was pleasant and whether or not they responded in kind was their deal. I just find it amazing that these dog owners would think they (a) should be out there thinking no one else is, and (b) that it is okay to let their dog defecate anywhere they want out there. At least one person I saw had a bag for poop and everyone had their dogs on leashes. That hasn't always been the case. I recall earlier this year a young woman with a free ranging dog gave me a look that could kill when her mutt about caused me to crash. Yeah......my bad! All of this since that dratted dog park opened. Hopefully Saturday's bunch, with their dogs on leashes, will be the normal and not the exception.

The Green Belt is now alternatively harder than a rock or sandy. Big stretches of sandy trail exist out there now so a fat bike really makes for a good ride at the moment. Of course, that could change, but that isn't likely until Winter when we will have to see how the weather treats us. I've seen big promises of more snow than last year, which, honestly, wouldn't take all that much to accomplish!

The Black Hawk Creek is as low as I've ever seen it. Sad to see this, but I took the opportunity to take an image or two while standing on dry ground in the middle of the creek's normal run. Hopefully I never get that chance again. The lake is also as low as I ever can remember it. Circumnavigation was no issue except at a couple places where abandoned beaver lodges were. there I had to scramble over the top of a dilapidated pile of interlaced branches. At least the beavers made it so strong it easily supported my weight, despite the fact that the branches were so dry. 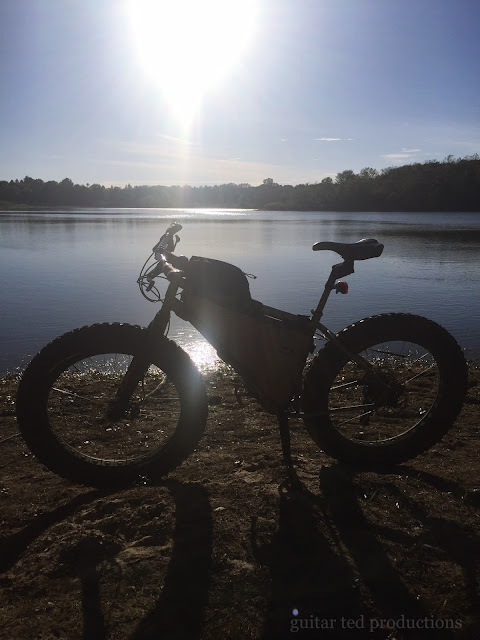 The ride went off without a hitch and the circumnavigation of the mucky shoreline was fun, but a sad chance all the same. I'd rather that the lake be full and at normal water levels. Low water crawling is fun on the fat bike though. I gotta admit that. I'm glad I got out and did it. But with rain in the forecast, perhaps things will start to turn around for the better now.

And perhaps things will turn around for the better for my health as well. The symptoms of this illness seem to fit in with what I am hearing many others are suffering from in this area. I understand this strain of crud seems to hang on and on. I can confirm that, yes, it does! But it is time to forge on and see if I cannot make a little headway against this and regain my abilities to do some longer rides.
Posted by Guitar Ted at 1:30 AM