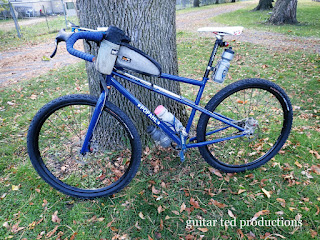 So, now that I have a modicum of a chance to physically do a century again, and now that my rig has proper tires and wheels on it, I am ready to set sail for 100 miles of single speed gravel travel. I thought I would share the details of the rig I am using before I head out on this deal.

The single speed I chose to use is the Pofahl custom bike I had made ten years ago. You long time blog readers need no introduction to this one. It has already been on a century gravel ride before, so I know it will be a comfortable, capable bike for this trip.

I did make a couple of modifications to the usual Pofahl set up here though. The wheels and tires are completely different here. While the wheels are still Industry 9 hubs and spokes, the rims are Bontrager Duster TLR rims. The rear hub is single speed specific one in black ano and a few years newer than the one I have on there usually which is kind of orangey-bronze and was a 2006 model single speed specific hub.

The tires are new Donnelly MSO 50mm with the old Clement hot patch on there. These are tubeless ready versions too, and as such, they are a beefier tire than the Sparwoods or the Cazadero 50mm tires I've tried out. In fact, they weighed a hefty 750 grams each on my Park digital scale of Doom. That's heavy.......or is it? There are "tough" tires and then there are fast, supple tires. You usually do not get both. For instance, the aforementioned Sparwoods are designed to be extra tough, they are heavier, (700-ish grams in 60TPI), and they have a puncture protection belt under the tread (60TPI versions), which makes them ride stiffer too.The Caz's, on the other hand, are light, (530 grams), and paper thin. They do not hold air as well either due to this. Fragile? Yes- likely they are.

I've got a lot more to say about all that, but that's all coming up in a tire review soon, so stay tuned. For now I am just sticking to the changes to the Pofahl. One other change was to add a partial set up of the Bar Yak system on there to hold my cues. I may try turn-by-turn directions with my Lezyne Super GPS if I can figure it out in time. Then there are lights, because, well, Late Fall, that's why!

So, I have this Lezyne light which I mentioned a week ago or so here. It is plenty bright at the middle setting which yields 9-ish hours of light. I won't need that long a run time, but I figure on starting in the dark, at least.

The tail light will just be an ordinary Bontrager cheapo unit. Battery operated. Old school. Out on the gravel it should show up just fine. Again, I doubt that I will be in the dark all that long on this run. Hopefully I also will get done before sundown.

So, that's basically it. It's all set up and all I have to do is to get the map tweaked out to actually be 100 miles. Right now it is a little short. The route will be mostly single speed friendly and I have towns to go get things out there. It won't be the most scenic route, or the toughest, but it will be a gravel century. Hopefully I can get this knocked out yet this month. That's the plan. Then if I am successful I will look at the next century plan, a reprise of the Fat Bike Century.
Posted by Guitar Ted at 1:30 AM

Cool bike, Mark! All the best for a successful SS100!

Where did you get that little clip board? That's a perfect size.

@Robert Ellis- It is part of the Bar Yak Q-sheet holder system which I modded to fit the load bar.

I've never gotten turn by turn to work reliably on my Garmin devices, and just follow the line. I find that works great for me. I couldn't hear the beep over the crunch of gravel anyway.

The scariest light I've run are the Conti SpeedKing 2.2s. They've never actually been a problem, and they are crazy fast, but I also don't trust them, so won't run them when I need rubber I can count upon. But man are they fun to fly.

I have been pretty impressed with the updates that Garmin has been pushing out for the 820 lately, specifically in the area of navigation. When I first bought the unit this year I thought that it was the worst device I had ever mounted on my bicycle; took endless hours of forums and blog readings just to figure out how to turn off the car like "recalculation" when it went off course ever so slightly or if I dropped something had to turn back to pick it up... Garmin lost it's mind. However, the last few updates have really seemed to get things in order and I have been able to ride while on a data screen and have confidence that the Garmin will let me know before the next turn arrives, so far it's worked flawlessly for about a month and a half or so. It even seems to be able to find the course again and continue on from there, which it never did when it was new. Competition is always a good thing and I think Wahoo, Lenze and other companies getting serious about cycling computers in the last few years have really gotten Garmin's attention as they seem less like they are resting on their laurels now than they were even a year ago.

@Rob E. I refuse to buy Garmin because I won't reward their bad behavior, past or present.

Best of luck and a memorable journey for you, I hope. Would love to ride a Sunday gravel deal some time, but you're probably busy on Sundays, as I am on Saturdays. Your rides, solo or group, always have a story that develops within. Cheers bud!