Just about this time every year since, oh I don't know when, I go on a ride through the Green Belt to check on the Fall colors. Sometimes I have to go a few times to hit "peak color". That's why I decided to try and see what the trees were up to yesterday.

The Green Belt isn't a place that gains or loses much elevation. A few feet, I'd wager, is about what it amounts to since the Green Belt contains Black Hawk Creek. Plus, this part of Iowa isn't known for its hills. It's got some hills, to be sure, but they don't help you with views of the Green Belt. Back in there, it is very flat!

There is one place; however, that does offer a vista of the trees in the Green Belt and it is where there has been a meadow for a long time. The trail has traditionally just skirted this meadow, and recently a walking path has been mowed into the grasses there so you can get a good, up close look at things. While the trees haven't taken over this area yet, they are encroaching upon the meadow and it won't take long for this vista to be choked with trees. I would like to see the City do a prescribed burn back in there. It is getting very close to critical mass for a few places back there in regard to tree encroachment.

Well, anyway, the vista was reached and the trees are not quite ready yet for prime time.  I think in about ten days or so, it will be at the peak colors, so I will have to come back and check this out then. For now, I have a couple of shots to share. 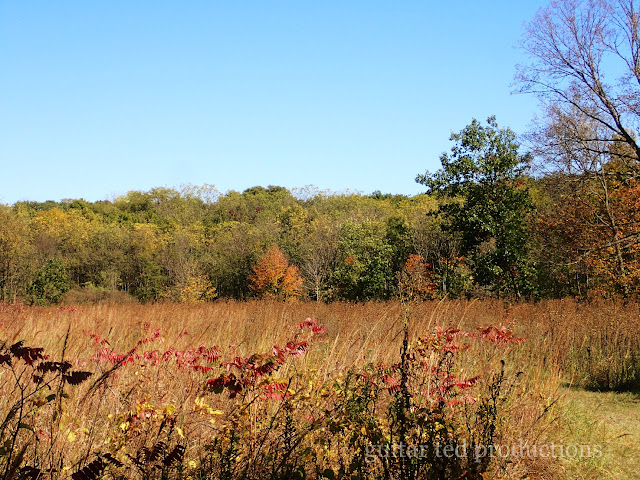 So, moving on from there I wasn't very far from the Western entrance to Marky-Mark Trail. This year marks the 20th year of its existence! Man! I can hardly believe it  has been that long since I and another "Mark" worked to put this in. Essentially, for those locals that don't know, Marky-Mark runs roughly parallel to Ridgeway Avenue between the main entrance on the north side of the road and the secondary trail entrance further to the East on the same side of the road. There used to be more to it than there is, but the Eastern section was lost long ago and the only part that other riders seemed to be interested in was the connector bit, so it is all that is left now.

So, anyway, about 20 years ago I started clearing trail back there and I had a little assistance from a guy named Mark as well, which is ironic because he was a dyed in the wool roadie. But be that as it may, I did most of the trail back there. I was a bit frustrated when riders only seemed interested in the connector bit, but that's the way it goes sometimes. At least that bit got burned in and lasted the last 20 years.

There were a couple of times that Marky-Mark nearly disappeared. As recently as a few years ago was one of those times. Someone else decided to take up the mantle for clearing it and saved it. I still am not sure who that was. Today I found three deadfall trees on the trail and one more that will require a saw. I decided the other three were things I could tackle. Well.......wrassle would be more like it. Tree wrasslin' is one of my specialties!

So, I got off my bike and assessed the situation first. After determining what to do, I started in, and the duff, rotten branches, and insects were flying! The first one was an easy "slide job" off the trail. The next one was actually a hangar. It was laying across the trail about five feet in the air suspended by other smaller branches and shrubs. This one was a little sketchy. I easily could have dropped this one on myself, gotten injured, and had been in a world of hurt, but it went my way instead. No harm to me and after a bit of wrangling, it was clear of the tread of the trail. The last one took a lot of effort, and I was not sure I would win, but in the end I did by swinging it to be parallel to the tread of the trail.

I have a plan to extend the length of this section of trail in to some unused area of the Green Belt up along Ridgeway Avenue. I'll probably keep it short and manageable first. The Fall is an excellent time to do trail work, so I think I'll get in to that a bit again here and see how it goes.