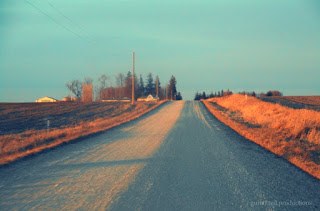 Well, we did it. We drove the entire course, plus a bit of a reroute. We finished after dark, We started in Waterloo at 6:00am and I got dropped off by Tony at 6:32pm. We drove a total of just under 500 miles to, doing the route, and back home again. I actually woke up for this adventure at 4:30am, so as I write this, I am a bit discombobulated.

Okay, so with a totally new route, new first checkpoint location, 14 or 15 sections of Level B roads, and some rad historical and cultural things to see along the way, I was excited to check out the route. Tony and I were all business. We just didn't have time to dink around anywhere. We did our stops like we were in the event. Get 'er duuun! In and out in a flash.

The route was going swimmingly with Level B's checking out and all the mileage being spot on until we saw it. "Road Closed To Through Traffic". Uggh! Okay, let's go see what is up here! Well, as it turns out, the road was great right up to the closed bridge, which has a perfectly good deck but is woefully under-engineered for today's Ag equipment. So, we're going to allow the riders passage as long as everything checks out next Spring.


The weather was gorgeous and we were able to drive every Level B Road with ease. Some Tony was calling "50 mile an hour Level B's" and he really did go that fast on them!

Once again, we were rewarded for doing recon in the field by finding an "open road" which clearly was not and had not been that way for quite a while.

GPS from three different sources, (including the guy who puts out that gravel route map), and paper maps including the State DOT maps all show this road being clear. Yep.......you can only trust your eyes. Putting your trust in analogue or digital technology is a fools errand. Trust in that stuff at your own risk. I do not trust that stuff. For me, it is merely suggestions and maybe they will be true. I would have been floored had we not found something like this. In fact, I expected more. Glad we found an easy reroute for this and that there were not more issues.

So, my take on the route is that it is mostly good. There are about twenty or so miles I was disappointed in. I likely will reroute that section as well, but it is in an area I think will not prove to have any weird issues. But.......you never know! Of course, it is at a point about as far away from me as you can get. Why wouldn't it be? Ha!

So, I'll have more details in a follow-up post at a later date. We identified a checkpoint #2, but the mileage may change if I reroute the aforementioned section I don't like. I will have a solid amount of miles of dirt to share with you later as well, since that all checked out. Oh! By the way, I think that there was one "bonus" section of Level B. So maybe 15 sections of dirt? I'll have the final tally for you all later.

That's it for now though. I am tired!

I'm "that guy who puts out the gravel route map".

I make it clear it's just State of Iowa data from 2013. The first thing you see on the map is a disclaimer warning you of such.

All maps are snapshots of the past. I am happy to update the web map with more current data, but the state has not released any. I also ask for updates from users, but to date I have received zero for Iowa. I don't live in Iowa, I can't fix what I don't know about.

@Marc Pfister- Thanks for chiming in.

My point is that people, (read- not you specifically), put far too much trust into resources like yours which should be taken as "good suggestions", or a guide, NOT the "gospel truth" of where one can ride. I find too many people are too lazy to research, or just cannot be arsed to realize that resources like yours are merely what they are- not a "ready to ride" route suggestion.

So, I stand by my statements in the post: If you trust these resources as reflecting what is actually there, it is a foolish thing to do.

I understand where you're coming from, it just feels odd to be specifically singled out when I'm the last guy on the food chain here. I'm not a county, a state, or a big mapping company. I don't live in Iowa. I only built it because somebody in your forum asked if it was possible. The PDF maps didn't work on their phone so I converted the data to a phone-friendly format.

@Marc Pfister: Well, if you feel "odd" about it, I can only say that it was not my intention to make you, specifically, feel anything. I was using the example of your site, along with other digital resources that I specifically call out, (ie: you were not being singled out personally or even by your work),as things one cannot fully trust in.

As you say, the part about the information not being 100% reliable is understood by you.

In my opinion, if you put out information on the internet, like I have for over a decade, you have to be prepared to have that information be, amongst other things, misunderstood. This being a good example of that, by the way.

It is also my opinion that "routes", as defined by popular opinion, are things that do not have mistakes in them, or at least, people don't take the time to consider that they are not infallible. My intention with the statements in the post were to, perhaps, help dispel this erroneous thinking and NOT to draw you personally through the mud.