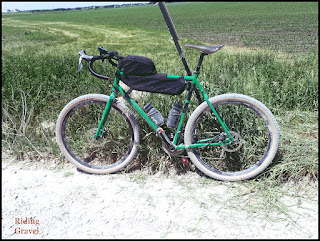 It is that time of year when I start reviewing the bikes that got me through 2017. Many of these bikes have been tweaked and changed so I will talk about that and why they were important to me this past year.

I also swapped in the Redshift Sports ShockStop stem this year from a review on RidingGravel.com. Boy, did that make a big difference. I had put a Salsa Cycles Cowchipper on the bike as well, which also helped a ton. My left shoulder was a big problem during 2016 and these modifications made a huge difference in totally relieving the pain I had which caused me to not ride this bike much at all during 2016. I also swapped out the SRAM Force 22 group, keeping only the crankset on the bike, for Shimano Ultegra 11. That also was a much liked change.

I feel like I gave SRAM a shot but it just isn't for me. The shifting was slower and clunky, plus I didn't get on with the levers and hoods at all. The Shimano is an improvement in almost every way. This goes only for myself here, but I cannot imagine any way that SRAM is better for a drop bar set up. Okay........maybe E-tap. Maybe.

Depending what happens with Black Mountain Cycles disc bike for next year, which I'd like to get, this bike may go on the sale page in some form or another. But we'll see.