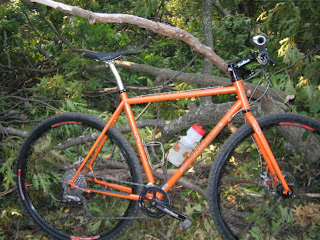 Salsa Debuts Some '08 Product: Check out the new Salsa La Cruz. It's a disc specific cross bike with fat tire tendencies. True Temper tubing, as always and will also be available as a complete rig soon too. I might be a bit prejudiced, but is this the perfect Trans Iowa bike or what? Salsa is also updating the El Mariachi to be more in line with it's Mamasita sizing and loses the seat tube/top tube brace of old. Check out the goods.
Eurobike Gives Some 29"er Love: In an area of the world not known for 29"er interest, (You could even argue that it's hostile to the whole idea) there is some 29"er breaking news to be had. Along with the Salsa news we have Schwalbe coming out with a 29"er Racing Ralph. Not only is it a new tread, but it's not marked as a 28" tire. Something the Germans are wont to do and kind of kills any interest here in the states. (It wouldn't come up in a search on the net, for instance) At any rate, the tire's tread is an update on the original Racing Ralph, a tread that was very highly regarded as a fast rolling yet voluminous tire for mountain biking. I sure hope they have some on hand at Interbike to try out!
Team Stoopid- Ready To Roll! Well, Saturday I will join my other three team mates in the 12 hour team event at Seven Oaks near Boone, Iowa for some off road fun. I got my old Turbo Cat lights dialed in, some new tires for the event, and generally gussied up the ol' Inbred for a show down with the trails out there. Not really a serious event, as I'm lucky if I'll do more than a couple of laps. More of a fun time doing what I love to do with some like minded folks. The real news is that the 24 hour solo event will be paying out the big bucks, ($1000.00) to a new winner. That's where the slug fest will be and some serious pain will ensue. I'll have some race recap and photo documentation later on in the weekend.
Labor Day Weekend: End of the summer, ya'all! I hope it was a good one for you. I didn't get out half as much as I would have liked to and didn't see half as many folks as I wanted to either. I wish there was more time. The thing is, Fall is going to be gone just like that and there are so many things on the schedule that any fun riding time looks to be nil. Too bad, Fall is one of my favorite times to mtb of all.
Well, don't be too stupid this weekend and be very careful of those who will be. Ride a bike and wave goodbye to another summer, 'cause here comes Fall!
Posted by Guitar Ted at 5:37 AM