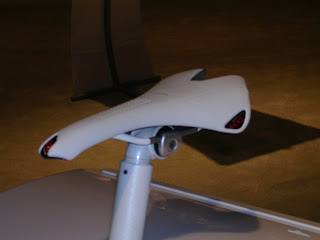 More stuff from Trek World here. I posted a bunch of the 29"er stuff at Twenty Nine Inches so be sure to go there.

Bontrager has a really cool new saddle line that closely resembles the Specialized Body Geometry line in that three different widths are available in the race models. Bontrager also has a sit bone measuring device to help aid dealers in dialing in the perfect saddle for you. 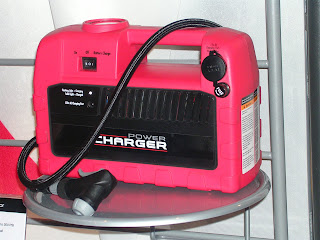 Here is a handy little gizmo that is called the "Charger". It's an air inflation device that runs off of 110 volt, 12 volt, or it's own internal rechargeable battery. This makes the Charger a great tool for remote inflation duties, say like in your 24hr race pits, or just to have along in that remote area you cycle in. It's capable of pumping up tires to 200psi! Pretty cool. 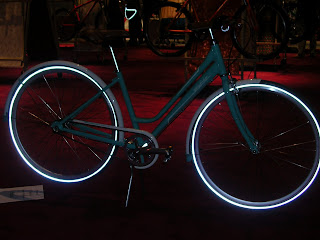 Fisher was showing off two prototype "townie" type bikes with a retro-ish/hand made flair. Sporting wrap around chain guards, full fenders, and internal gearing, these bikes were quite different and maybe even a bit out of place at the show.

I got a chance to chat briefly with Gary Fisher himself and I asked about these bikes. Were they something that Fisher will actually produce? I got a resounding "Yes!" in answer. It seems that we will most likely be seeing more of this type of utilitarian, work bike coming from Trek and Fisher in the future. I applaud Trek and Fisher for making an effort in this area and the bikes are certainly looking great so far. 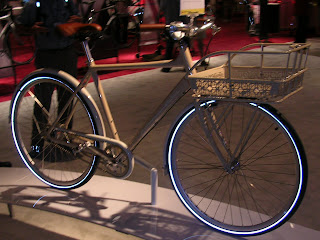 In fact, I might even go so far as to say that they look every bit as cool as anything from the North American Hand Made Bicycle Show, where these would have been right at home. (Of course, being prototypes, they actually are hand made bikes in every sense of that term)

It'll be cool to see how the production models are able to carry over the look and feel of these two beauties. 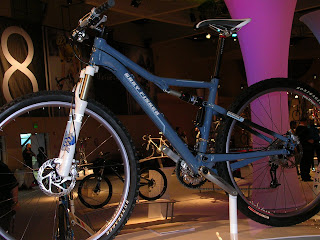 I didn't post any pictures of the HiFi 29"ers at Twenty Nine Inches because that bike has received a ton of exposure already in the Pro and Plus models. This is the middle offering in the HiFi line up, which is a bit different hue of blue than the top of the line Pro model. A little grayer, if you will. Anyway, the HiFi looks to be selling very well already and is getting great reviews.

Interestingly enough, Gary Fisher himself told me that the hard tail line was the big story for the '08 line. I can see that the Superfly might have had something to do with that, but Gary was actually referring to how the bikes handled. G2 geometry is going to be the standard for future 29"ers to be held against in my opinion. The bikes do handle differently than earlier 29"ers and require no modification to your riding technique to garner the best out of a big wheeled bike. This is a revolutionary thing for 29"ers.

Look for reports of how the G2 geometry is working already for owners of new Fishers. It's no marketing B.S., it's real, and other companies would do well to check it out.

I may put up one more Trek post, and maybe rant some more on the handling thing tomorrow. Stay tuned!
Posted by Guitar Ted at 5:33 AM