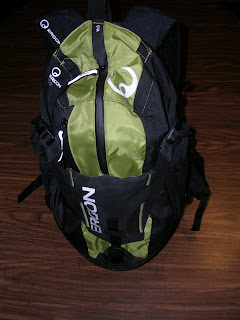 Mr. 24 made a rare appearance at work yesterday and lo and behold! He had an Ergon BD-2 with him that he was letting me try out! Not only that, but a Team Edition one.

Needless to say, I was stoked. Mr. 24 then expertly fitted this size large men's pack to my back length and ( sizable) girth and I was set. (More on the sizing in a minute) He then took the time to point out some of the salient features of this pack. It's got a lot going on, so let's dig in, shall we?

First off, I'll detail the models for you. Their is a smaller pack, called the BD-1. It holds "12 + 4 liter" volume and comes in a mostly black color or the Team Edition. This BD-2 model also comes in the more sedate color and holds a claimed "15 + 5 liter" volume. Both the BD-1 and BD-2 come in a "M" or "W" gender specific model as well. (I'll bet you can guess what the letters mean.) All models are hydration bladder ready, although they are not supplied with one. Provision is made for carrying a bladder by each model having a pocket inside that is made for a bladder and has a compression cord to help keep the bladder stable inside the back pack. Velcro retainers are stitched to the shoulder straps on either side to allow you to route your hose down the left or right side. Nice! 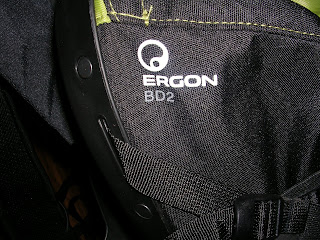 The construction of the pack is a combination of fabrics and plastics which make up the framework and the "Backpack Motion System", which I'll get to in a moment. The BD-2 that I received has plenty of storage pockets inside and out to allow you to organize your load as you see fit. Their is an outer "flap" attached by compressible webbing that could be used to carry a helmet, let's say, or other gear that you would not fit into the main compartment. (I'll have an example later) Graphics are tastefully and typically high tech. The green is pretty well represented on my monitor here, but let me say that it is NOT neon! It's a rather tasteful, subdued hue, easy on my eyes at least. 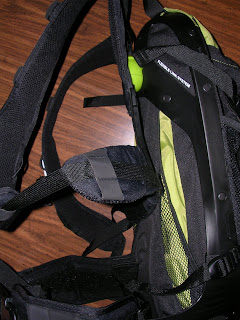 The whole idea behind this new backpack is the ease of use and economical way in which the load is carried by the wearer. This is accomplished by the revolutionary "Backpack Motion System". Specifically it's the "Flexible Link System", or "Flink" for short. You can see in the photo to the left the green piece linking the main body of the backpack to the strapping system. This is the Flink. It acts like a joint which allows the pack to pivot and the wearer is free from inertia created by the weight of the backpack and it's load. This is what allows you to be free to move as you would without a backpack on and takes far less of your energy, since you are not moving the load every time you make an upper body movement. This should result in less fatigue during extended use of the upper body. Brilliant! But that's not all. 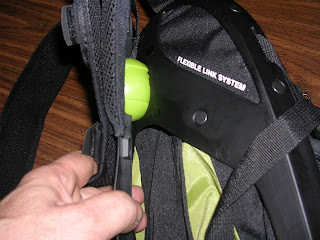 The Flink System is only half the story. The other part of the beauty of this backpack is how it directs the weight of the load to your hip bones and not your back. This is done by the strapping system and the lower framework of the backpack. Working in concert with the Flink, the strapping system holds the backpack off your back somewhat and the weight of the load is centered off of the Flink joint. The waist strap directs the lower framework, (which is nicely padded I might add) to your hip bones when the pack is properly fitted. The weight of the load is therefore mostly borne by the hips rather than your back, helping to further decrease fatigue during riding. I should mention that the strapping system is adjustable and can be positioned in three different mounting spots to accommodate for back length discrepancies between individuals. 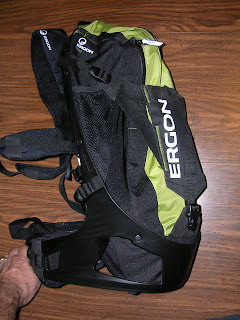 So, does it work? Well, after I got the pack and work was over, I downloaded everything from my "man-purse" messenger bag into the BD-2 and even put the messenger bag in the compression flap outside of the main compartment all rolled up like a sleeping bag. I had all kinds of things in there including three inner tubes, a mini pump, a shock pump, two Cliff bars, a digital camera, a pair of socks, at least four multi tools, some electrical tape, a t-shirt, a bottom bracket cup, a cable lock, a blinkie light, and six Roma tomatoes that I got from a co-worker. It all fit with room to spare.

My initial sensation when I put on the backpack to go home was that it didn't feel like I had much of anything on my back. I did sense a shift in my center of gravity, which caught me off guard and I took a quick step backwards to catch myself. That was different! I shook around and the ease of movement was clearly above that of a traditional backpack or messenger bag. Cool! So, I mounted the bike and went home. I first noticed that I could feel air rushing around my back where previously I had never felt it while carrying a load. That was nice and a welcomed thing seeing how hot it's been lately. I had a jersey on and while riding I checked to see if I could get into my jersey pockets. Yep! The outside two with ease. The middle pocket was somewhat obstructed, but you could stick something in there and get it if you really needed to. That was amazing!

Going around corners at speed, jumping curbs, and hammering out of the saddle were almost like I didn't have anything on me at all. Very easy to move any way you want to with this system. I'm very impressed after just one ride. I felt that the Ergon Team would have a winner in this backpack the minute I checked one out at last years Interbike and I still feel that way. I will be wearing this constantly now and I will be putting it to the test to find any weak spots for everyday users like myself. As of now, no chinks in the armor yet to be seen!

Have a great weekend and ride that bicycle!