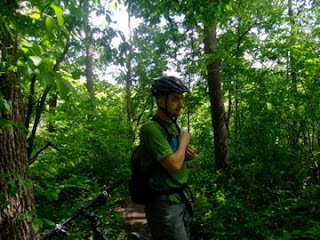 <===If he turns sideways just a bit more he disappears!

This weekend and the first day or two of this week I am up here in Minneapolis for the Salsa Sol Sessions and to visit my friend Jason and his great family. We got into town Sunday after escaping another round of severe thunderstorms Saturday that left quarter sized hail and knocked out our power last night for three hours.

The first thing I have to say is that the weather can still be good! In fact, it was a perfect Father's Day here in the Twin Cities.

Jason hauled me out to Murphy-Hanrahan, a newer trail system up here that I had never been on. Usually I ride at Lebanon Hills whilst I'm here and I really like that place. But I gotta say, there's a new sheriff in town and I'm likin' it a whole bunch. In fact, t is soo good, I have to do that again! 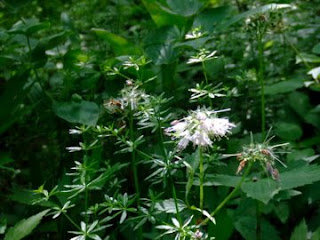 <===We didn't ride so hard that we didn't stop to check out some flowers though!

The thing about "Murph", as the locals call it, is that it is the flowiest, buffest, fastest single track I've ridden in a good long while. Some grizzled old locals may recall how George Wyth Park's "Bridge Trail" used to be about the funnest stretch of single track in Waterloo/Cedar Falls. Well, I just rode 16 miles of it up here that was twice as good as that ever was. Really! 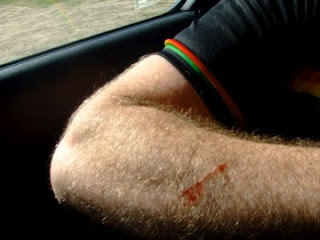 <===Shed a little blood, but I didn't even notice till later!

Of course, the "big deal" was the "what I rode", and not so much the "where I rode", but I'll get to that later. I have to hold off on that part for just a bit longer but it will be worth waiting to check out. Really........

For now I will say that a day spent riding some sweet trail, sharing it with a friend, and hanging out and chowing down some fine grub with some brew to wash it down was a perfect remedy for the last week and a half. Thanks Jason! I needed that more than you know!

Tomorrow has some lazing around, riding, and the "official product launch" on tap for me here. I'll be downloading that info for release on Tuesday, so check it out. Until then, me and my sore legs are hittin' the hay!
Posted by Guitar Ted at 12:24 AM