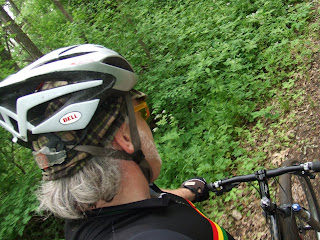 It's been said that a good bicycle ride can clear the mind, reduce stress, and give you a new perspective on things.

Sounds like the antidote for what ails us about right now.

While it might seem silly to some, I think it is a perfect idea. Especially around here in Iowa. Of course, you must be very, very careful! Stay outta the water and all of that, but ride where you can.

My bike ride is coming, but not quite here just yet. Over the last several days I haven't been able to ride due to the problems here. Normal daycare for one of my children has been interupted and I have had to find an alternate choice across town in Cedar Falls. That means an hour drive, or close to it due to all of the road closures. Not conducive to bicycle riding, that's for sure!

Some good news there though: We have had some bridges re-opened and some road choices are back on the menu, hopefully easing up the craziness here in the city. I know it is a regular thing elsewhere, but it took me at least a half an hour to go about a mile on Ansborough Avenue yesterday. We're not used to anything like that!

And more good news! Captain Bob and I recieved some parts for our little project bike and we should have something to show for everyone real soon. Also, the Decorah folks decided to throw a party on the original Big Wheeled Ballyhoo weekend anyway. Looks like there will be camping out, riding, and general tom-foolery going on up there. I might have to show up for that.

So anyway, getting out for a bike ride. Sounds like a perfect idea!