Something New To Play With 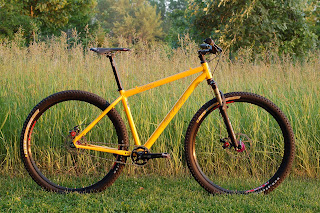 Awhile back I had hinted that Captain Bob and I would have something special built up to test out over the summer months. Well.........here it is! 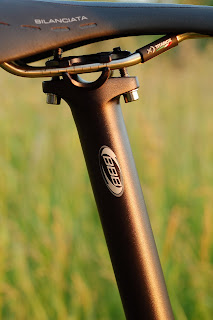 We have a full compliment of BBB Components on this rig to test out. (By the way, "BBB" stands for "Bike parts by Bikers for Bikers") BBB is a European company that sponsors a few pro road squads and makes a varied palette of cycling goodies.

This seat post is a no nonsense sort of component. 400mm in length and it looks to be pretty tough. 246 grams in weight for this 27.2 example. It's got a two bolt clamp which is pretty standard for quality posts these days.

Smallish logo looks understated and doesn't take away from the spartan appearance of this post. 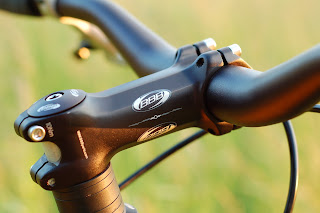 The stem continues with the understated look. It is a very nicely made piece executed in 2014 alloy and 3D forged. It has a paltry weight of about 134 grams. It seems very smartly made though. Four bolt clamp should keep the 31.8mm SkyBar in place. It is a 6061-T6 piece with 35mm rise and 10 degree back sweep. It weighs in at 336 grams. it is pretty stout! 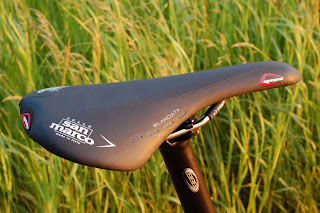 We also received this Selle San Marco Caymano saddle to mount up on the BBB post. It is a pretty well made Italian saddle and weighs in at 170 grams. Unfortunately, it doesn't agree with my tush at all, so Captain Bob will be putting this perch to the test, not me! 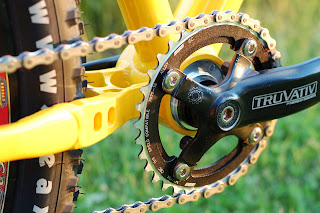 The chain ring is also a BBB piece called the "RoundAbout" (which always makes that "Yes" tune start spinning in my head!) We're spinning the 34T version here though and it is 7075-T6 alloy ring. We will be single speeding this one, but it has some rad looking CNC'ed ramps on the back side for you shifter freaks out there.

A couple of other things to note here. We are also using a BBB TurnAround headset on this Soul Cycles Dillinger which Captain Bob and I will be test riding around these parts most of the rest of the year. Look for us and ask for a ride! Another interesting bit that should find its way onto this rig is a Spinner "2 Nine" fork which we may be getting soon to check out. It has an air spring, lock out, and rebound control. It looks much like the RST M-29 which I thought was an excellent fork last year. Perhaps we'll get the chance to put the Spinner through the wringer this summer and see if it measures up.

All of these components are to be reviewed and tested on The Bike Lab and Twenty Nine Inches. So, look for more on this stuff there in the future.
Posted by Guitar Ted at 5:39 AM