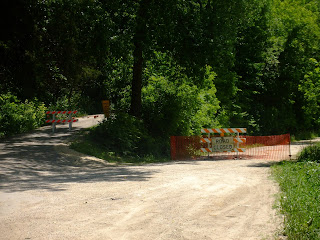 <===Most roads along the river in Decorah were closed due to flood damage.

I made the trip up to Decorah yesterday on what was to be the first day of The Big Wheeled Ballyhoo. Of course, since it has been cancelled the weather has been top notch. Oh well!

I found some good things and some bad things. I'll get into that as the post unfolds here. The first thing I saw was that the campground was dry, but all the grass was matted down and covered in that dusty silt that you see when flood waters recede. Maybe it wouldn't have been a big deal, but I did notice that the ground was like cement and very rough and bumpy. Probably not a lot of fun to camp on, ya know? 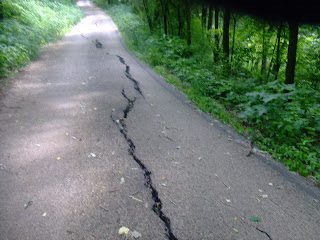 <===Park road damage in the Pallisades

I started out the day by kitting up right out in the open, (hey, I have no shame!) and I noticed one other pair of riders on Niners just taking off as I was getting ready. They would be the only other mountain bikers I would see all afternoon.

I started riding up Pallisades Park road to warm up. I had the bike dialed and I was hoping for a good ride. I got started in on the trail going uphill. I started to notice that I felt out of it mentally. I don't know what it was, but I just didn't have my "A" game on. I was sloppy and I couldn't muster any motivation for tougher sections. I was starting to get a little down about myself, but I kept plugging along knowing that I'm a really slow starter. Sometimes it takes up to an hour for me to really come around. 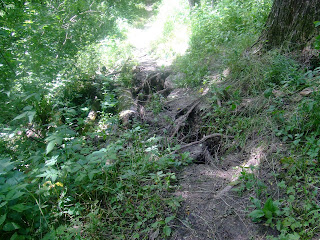 <=== Trail damage in the Pallisades

I noticed several places on the down slopes that were washed clear of their top soil leaving behind limestone shale and plates that were loose and rather skittish. It reminded me of El Paso! Then there were several spots where the runoff had carved a deep rut just off the trail leaving a precarious drop to one side that demanded precise navigation to miss. I would have been greatly concerned had we held the event just because of these things which I found in what we were going to use as the demo loop. But things were even worse in other parts of the trail system.

I exited Pallisades and hit Larsen's Loop which I cleaned about 80% of. It's a very technical trail and one I'd like to master some day. It's also very tough getting in and out of that loop. I had one "fancy dismount" that saved me a 15 foot drop to sharp rocks that I was very proud of!

I got over to Van Peenen and found that the big main climb in was all loose rocks and was pretty dang tough. Although by this time into the ride I was finally getting my groove on. I cleaned the entire climb, thanks in part to the Fisher Hi Fi I was riding. Full suspension saved my bacon a bunch yesterday, I'll say that much! 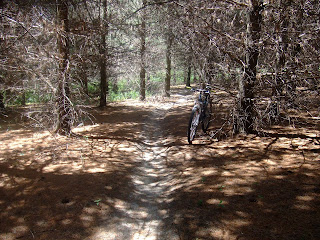 <=== One of my favorite sections- Pines West

I headed over on a cutoff to the open meadow trail looking for signs of the local "ballyhoo-ers" but I never saw any signs of them. I even stopped to listen for "human activity", but all I heard was the gentle wind in the grass. Did I mention that it was perfect weather there?

After the Pines West section, which I love, I headed back around on Fred's Trail. I found a few more areas of concern where runoff had eaten into the trail at different points, but mainly this section was pretty fun. I felt great and things were clicking. I stopped for a Cliff Bar, since I felt hungry, and I heard some voices across the valley. Maybe some other cyclists? I scarfed the bar, washed it down with some water, and headed down into the valley.

I headed up Randy's Trail to get to the top on the other side but I was quickly off the bike and walking. I found a ton of damage here that made the trail unrideable, or at least to the point that you shouldn't ride it. The water bars were even displaced! Anyway, I soldiered on to the top to find no one.

I was thinking that I had perhaps heard the Niner riders I saw earlier, but I think what I heard were horseman. I found fresh "road apples" piled at different places as I headed west along the ridge. Great! Horse poopy on my tires. Gotta love that!

I was looking for this sweet downhill section that ended near Dunning Springs that Bobby (Shrek) from Salsa and I did last year at the Ballyhoo. I must have made a wrong turn, because what I did find was a totally sketch downhill that was so rocky and steep that I had to get off and carefully hike down. Crap! Not what I had been looking for. It dumped me right out in Dunning Springs in the middle of a family picnic. Nice! "Um....hey! Sorry for barging in, but I was wondering if you had any leftover coleslaw." Heh heh! Yeah, I surprised them as much as they surprised me!

Then I headed back on Ice Cave Road to find the Dirty Blue Box. That road had suffered mudslides and rock falls, so it was also closed to traffic. Once back at the car, I saw the two Niner riders pulling out. I got my gear down loaded and headed over to T-Bock's for some brews and onion rings before I headed back to W'loo. A good three hours of riding and saw no one.

Maybe the local yahoos were out and about, but if they were, they were being stealth about it. Whatever, it was a great ride and I was glad that I made the trip. As for the Ballyhoo, yeah.....on the one hand it looked like I made a mistake, but after I saw the trails, well...... Let's just say that they were less than prime and probably would have been the cause of concern for sure if not injury. Not the best setting for a gathering of newbies to the system. I'm not placing the blame on anyone, (certainly, the DHPT has their hands full) but I am glad we cancelled it.

Definitely, the trails were way more difficult and challenging then they were before, and they are way tougher than anything else I have ridden here in the Mid-West. I will be back to learn more and become a better rider, that is for sure.

It just seemed weird that on a weekend that should have seen a whole bunch of riding going on that I was the only guy around, (The Niner riders not withstanding) It seemed like a ghost town when it should have been a boom town. Oh well........