Some 29"er Stuff: The Odd and the Shady 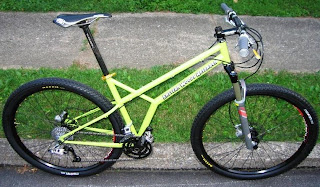 <===A bad pic of an Eastern Woods Research 29"er prototype.

Way back in the 90's, I had this thing for Eastern Woods Research bikes. I suppose it was the fact that they looked so different in that "erector set" sort of way. Whatever....now I see that they are setting out on the path of big wheels.

While the design is still off the charts as far as being different, I think the form follows function and there are some cool things going on here. The first is obviously the standover height, which is plentiful. The "bent" downtube is the other, which on a 29"er design will allow fork crown clearance galore. The crossing of frame tubing near the seat tube should result in a very stiff bottom bracket area and perhaps stiffen that front triangle. That triangle might still twist a bit though, seeing as how those top and down tubes are nearly in the same plane. That's my only concern here looking at it. Of course, a ride would tell right off. I doubt I'll be anywhere near one of these anytime soon to find out, but I would love to try out my theories on this with a test ride. 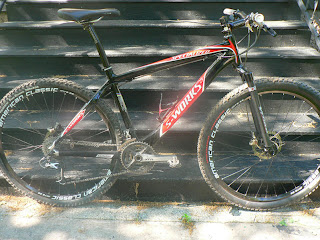 This showed up on Ridemonkey and was put forth as a Specialized S-Works 29"er. Look closely though and you'll see that it's a fraud.

700 X 45mm Panaracer Fire Cross tires are pretty cool meats but not a 29"er tire. The clearance at the seat stay yoke is super minimal with these tires too. Check out the bottom bracket height. Yeah..........not much drop there. It's pretty obvious that this is a 26"er. Just goes to show ya. You have to be careful on the inner-web-o-sphere. Things are not always what the first seem to be sometimes.

In other news, I am starting to put my focus on getting ready for the Guitar Ted Death Ride Invitational. A couple of notes here. Monkeywrench Nate stopped me at the Salsa Sol Sessions last weekend and asked if it was okay for him to come to the Death Ride if he wanted to. "Heck Yeah!!" Let's clear the air here.....ya'all are welcome! The "invitational" part throws some folks I guess. It's a spoof folks. Don't take it too seriously. In fact, that's the whole point of the ride. Sorry if I led anyone down the wrong path there!

Secondly, I have to get out and verify that the roads are even passable. No joke! Bridges and roads are severely damaged and impassable in several cases. Gravel roads don't get the love from the media, so I have to find out for myself where the damage may be in terms of my chosen course. Be prepared to be flexible folks. A total course re-route is not out of the question!