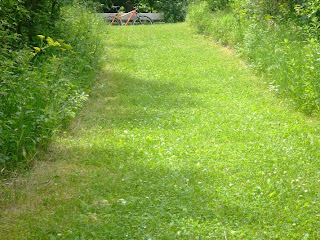 <==== There are some good climbs out here at Hickory Hills. Better leave yourself a couple of clicks in reserve for the top of this one!

Ten years after...(I wonder how many Google searches will end up here from that title!) Yeah, it has been at least ten years since I have ridden a bicycle down at Hickory Hills in Tama County. We used to race there back in the day, and it was a pretty fun place to check out, if only for the climbing/descending. This picture shows the top of the old "middle climb" which is just as tough as I remembered it to be. Most of the trail is "double track" wide since they use ATV's to patrol the park with now days. 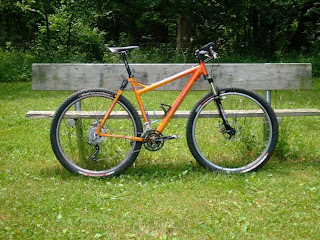 <===The weapon of choice for the day. The Salsa Cycles Dos Niner.

I was wanting to do some testing with the Intense EX-2 Stickey Lite tires and the Bontrager Inform RL saddle. I was going to head up north of Waverly to Cedar Bend. That is a park Captain Bob likes to use, but as we discussed this, Hickory Hills came up and I got the bug to go and check it out after all these years. I was really glad that I did too. 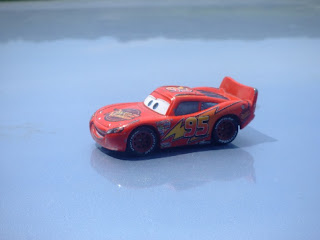 <=== Free toys included with every visit! I found this in the parking lot. Bonus!

The trails were recently mown and in decent shape, although you could tell that nary a bicycle is ridden on them, especially up top. Down near the lake I saw some tracks in the softer, muddier spots. Insects were so thick that if I stopped to take a photo, all I could hear was the buzzing and whirring of tiny wings. Yes, most of these were mosquitoes! 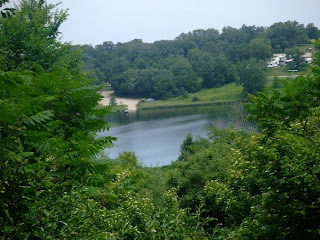 <=== The view from up top. Check it out! You can see The Dirty Blue Box down there in the parking lot.

The day was beautiful, sunny, warm, and not windy at all in the woods. Speaking of which, there are some pretty big trees here and there out in Hickory Hills. Thick green underbrush too. I felt as though I was in a jungle here at times. 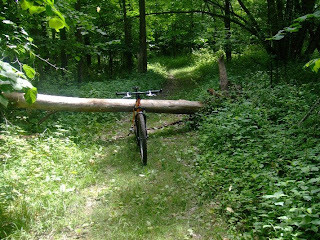 <=== Green is our featured color today.

I had fun checking out the old trails and things started out just as I remembered them. You head out across the earthen dam from the parking lot. This dam is deceptively smooth looking, but in reality is the bumpiest part of the whole trail system. I was glad to be on board the Dos Niner, I'll tell you that much! Then after that rattle and shake, I turned right to head along the bottoms next to the lake. 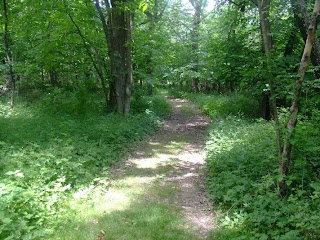 The trail starts to wind a bit and head left and up. You reach the old familiar intersection where the trail heads back down to follow the lake to the right, or you can go left. That way started out gently upwards with some big gentle curves which then led you to a hard left and a grind straight up the fall line that was probably the toughest climb anywhere near Waterloo off road. If it was wet, you were doomed to slip out about halfway up where it pitched upwards a bit more and there was nothing but dirt and roots to claw at. That isn't the case anymore. This climb has been modified and for the better, I think. 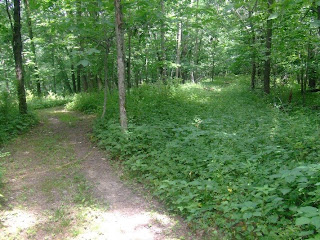 If you check out this picture, you can see the old climb, overgrown with low vegetation, on the right going nearly straight up. The new climb snakes its way back and forth across this old climb. It makes the climbing easier, but the descending is oh so fun! Dual slalom like corners and fast! Better have some good brakes to tackle this with any speed. I liked it much better than the old route. 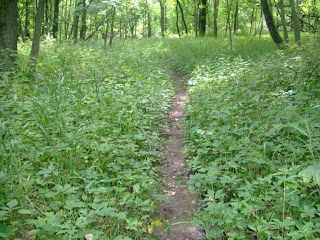 Once up top I looked for the old single track off the ridge on the south side. It is all overgrown and gone though. What I did find was deer paths so beaten in that they looked like bicycle single track. Really clean and just the perfect width. A bit of weed whacking and you'd be done here. Trouble is, deer do not respect property lines and don't believe in loops. Sheesh! If only these animals could be trained!


I went onwards to the big downhill at the east side of the park. You used to have a clear field of vision all the way down to your left, but not anymore. The underbrush has grown up so high that you find yourself in a tunnel of vegetation nearly all the way down now. Still, it is a fun, fast downhill.

I did some other 'splorin' and I had a great time out there. Seems that my ride lasted only a bit more than an hour, but it seemed like a lot more. Hmmm.......musta been a time warp.