I'm in a place where I have to make some decisions lately. Not the regular, everyday type either.... 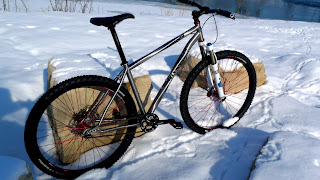 <====Do I take a single speed to the mounatins of West Texas?

In particular, I have been presented with a particularly difficult decision that is compounded by the fact that it involves travel in the thousands of miles for a period of stay that would last approximately 36 hours. Top that off by the fact that it would be necessary to make the trip by land, and it gets tougher to justify. You see, something would be coming back with me of the two wheeled nature.

That two wheeled vehicle would be a boon to my website, as it would be an exclusive test, (long term). And........it involves meeting and possibly riding with a women's professional mounatin bike team. 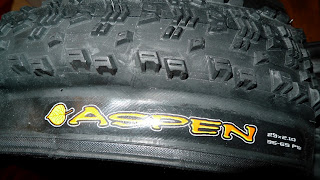 <=====Do I dare run these paper thin sidewalled tires in the rocks of West Texas?

But again, I would be driving as much as I would be there, and on my dime. Now as if that wasn't enough, there's more to it. And this is where it gets real, real difficult! This potential event is sandwiched inbetween two others I have already scheduled for 2010.

I am registered for the inaugral Chequamegon 100 on May 22nd. I've never done a "hundy" off road, and this event is being run in a way that is right up my alley by two awesome guys. I know lots of the folks that are going too. It just would be a killer thing to do. 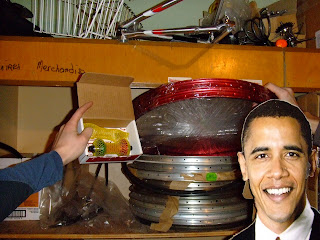 The event on the other side is the Dirty Kanza 200. A gravel event I need to cross off my list as a completion. Plus, really good friends are going to this event put on by some really good friends! Besides that, it's gravel, and in the Flint Hills.

I can not do all three events.

See, I told you it was a toughie!

p.s.- The event in question is in Texas, but NOT West Texas. That trip is a planned vacation in about a weeks time.
Posted by Guitar Ted at 1:00 AM

Oh my. That's a tough decision. I need more details.

@mw: Yeah, and the rims and hubs are going on a NOS KOS Cruiser too!
(Not mine- from Mike's Bikes trip a couple of weeks ago)

@Captain Bob: Yeah, it is a toughie, but I think I know which way I'm going to go.

Hmm Maybe this decision calls for a “decision making ride.”

How thin are those Aspen sidewalls compared to a Small Block 8’s thin sidewalls?

@Metro: Pretty thin, I am afraid. Like Racing Ralph thin or maybe thiiner. It has the most floppy, flexible sidewalls I have dealt with yet. Not all that wide either. Maybe 2 inches or slightly less.

My principle guide has always been "first things first" unless it's something pretty special. Would the cost of the trip in time/money/energy be outweighed by any of the factors coming out of the trip?

Meeting pro-women's MTB team - Cool, might get you some contacts, then again, you have those already.

Exclusive access to bike - Extremely cool. Lots of fun. Any potential to your bottom line professionally or financially? (don't need to answer that obviously).

Will any of the things you forego happen again? - Cheq 100, maybe. DK 200, almost definitely. Maybe let fitness be your guide? You might be too tired after the Cheq 100 to think about doing DK, you might not.

Your other choice, of course, is to send someone in your place. I'd gladly volunteer to be Mini-You for the 36 hour or so period in question. :)

i'd go with the no on the paper thin sidewalls. when you're on vacation, run thick tires and save yourself a long walk home... run 'em tubeless in texas though. the getto sealant is good in thorns, as you know. mix it a bit thick so it gels up right quick, uh huh.

run ardent 2.4s... or wolverine 2.2s. or racing ralphs with the reinforced sidewalls... that'd be the stuff.

i like that hub. obama's a rasta man, i think. he doesn't probably want to admit it, but i have faith.

what was the other question again? LOL!

have a great day!
mg