3GR Report: An Odd Warm One

November. Fall is gone, the leaves are down, and the days are just about as short as they are going to get. Usually we're dealing with chilly, gray, cheerless days. But not Saturday.

An odd day of warmth was on tap. Friday it started with a southerly airflow that was pumping warm, humid air into the Mid-West. It continued overnight, and when I awoke Saturday to get ready for the next 3GR it was already in the 50's.

I decided to wear foot covers, but that was a mistake. I could tell just on the way over that my feet would be getting overheated. The streets were wet with condensation. The air was wet feeling, it was so humid. What a strange day for November. That said, it was nice not to have to spend time layering up for a cold ride.

I headed out a bit early, so I took a bit of a different route over to the start that included some more gravel/dirt than I normally get on the ride over to Gateway Park. Good stuff. It was a nice ride over and I wasn't the only one who was out enjoying it. Lots of runners were too. 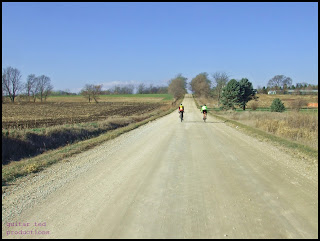 The wind was picking up, and I knew it was going to be a factor. Craig was already there at the meeting spot when I arrived, but he was across the street having coffee. Kind of threw me for a loop there, but when he showed up on his bike, all was made right. Then a few minutes later Robert flew up, thinking he was going to be late. He actually had three minutes to spare.

We took off with the tail wind and made good time going North. We met Mike coming backward toward us on his fat bike and he turned around to join us. There were some big puffy clouds flying on the wind, but it was nice to see what sun we did.

Of course, eventually we had to turn back out of the tail wind and face the facts of our situation going back to Cedar Falls. The wind was coming at us through the section where the rolling hills kicked in and Mike and his fat bike were slowed. I eventually dropped back and rode with him back to Robert and Craig, then we finally reached Mount Vernon Road and turned out of the stiff breeze with sighs of relief all around.

By this time it was also well into the upper 60's and my long sleeved wool jersey was becoming a bit too warm, but who can complain when you get such a day in the second week of November here? We rolled into Cedar Falls and up to Cup Of Joes for the usual and then it was off to home again.

By the time I got home it was 70°F and sunny. I ended up riding a couple of hours in the afternoon with my son, so by late afternoon, I was fried. But you have to take advantage of days like yesterday when they come along.
Posted by Guitar Ted at 1:30 AM

You didn't mention the crazy squirrel I almost flattened when it dashed across the bike trail right in front of me!

You got that right (warmth)...been out pidding around on the pavement with the boy today :) Sunny skies and 70+ temps,how could we not?