It's definitely edging away from Fall and hints of Winter to come are everywhere. The months of November and December typically are the cloudiest months of the year in this area. This has been the case around here as November starts its gray plunge toward the end of the year.

This 3GR was to be the one where I brought out a single speed for the ride. I was all set to bring out my custom Pofahl but at the last minute I realized it was set up with the off road gear instead of the gravel road gear. The off road gear wasn't going to work. Too spinny.

So I grabbed the other single speed gravel bike I have in the stable, the Singular Cycles Gryphon, which is set up with a proper gravel riding gear. I set out and hit the meet up point. The only other rider to join me this day was Mike. We set off on the regular route Northward.

It was chilly, but nothing we haven't had of late. Not much wind to speak of either, which was nice. The gravel roads were covered in new chunk, like last week, for the most part. Maybe there were a few more good lines though. 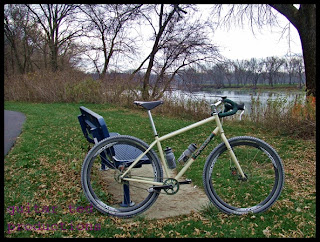 So......about riding the single speed. Well, the Singular is geared with a 36T front and 17 tooth rear cog set up and a 180mm long White Industries crank. The set up is not too spinny on the flats- I can easily do 12-14mph without too much trouble- and yet it allows me to scale the climbs as well.

Well, I haven't ridden a single speed on gravel in awhile, so it wasn't that easy, but I did better than I expected to. I got in over 40 miles total, and with working harder due to the single speed, I got pretty taxed. I actually went down for a bit of a nap mid-afternoon yesterday! A rare occasion for me.

But enough of that- The Singular is probably the perfect Karate Monkey for me. Say what? Well, here's the thing: My first 29"er was a Karate Monkey, and until I was able to expand to other 29"ers, it was kept back as a single track machine.  With those other bikes coming on line, it became more and more of a gravel road machine, and I had it refined down to the nth degree. I actually had two other bikes custom made that were supposed to be "the best", lightest representation of the Karate Monkey, but both resulted in failures at that task. Oh well.....

Then the Salsa Cycles Fargo came along, which did almost tick all the boxes, with the exception that I could not make it a true single speed bike. But wait......the Gryphon! And you know what? It is almost 100% what I would have desired my two custom bikes, (that weren't what I wanted), to be. Go figure- a production bike that was better than any custom I've had done to mimic my Karate Monkey set up. Yep. The Gryphon does what I want- it is a single speed, it doesn't have a goofy rear drop out, it is designed for drop bars, it is lighter, and it rides much more smoothly than a Karate Monkey. What don't I like about the Gryphon? Hmm.....not much, really. Not much at all worth mentioning.
Posted by Guitar Ted at 1:30 AM

The Gryphon is such a neat bike, I hope Singular keeps it in production for a long time to come