The weekend took a weird turn when I was awakened out of my sleeping in on Sunday morning by my Son who had my cell phone. He gave it to me and Mrs. Guitar Ted was on the other end asking how soon I could get ready and get down to the church to play guitar. The scheduled player fell ill.

So, I snatched my clothes, made short work of brushing my teeth, and ran out the door with my gear and '98 Les Paul Standard in tow to play the morning's services. That went as well as it could have and when that was over, it was already past the noon hour. So, after some lunch, I took my Son out for a bike ride.

We missed the night ride on Friday evening due to his wanting to watch a movie, but I'll take a daytime ride too. We meandered down to Waterloo's newly refurbished River Front area which is pretty nice at this point. I don't know how long it'll stay that way, but so far I have not noticed any tag art.

Speaking of art, we rode by the arts and rec center where they have several sculpture installations outside. Jacob pointed at one and said, "Hey Dad! Do you see that fine art there?" Ha! Well, I answered that in the affirmative, but left off my thoughts on what constitutes "fine art". We'll discuss that in the future.....

It was a great ride, a nice day to be out, and we even got to see hundreds of pigeons flying down by the bridge over the Cedar at 4th Street. There were so many birds we decided the sky look "peppered".

Then there is today's big deal.  Today marks the final stage of registration for Trans Iowa V9 which opens for Rookies and ends on Saturday, if not before. I suspect I'll arrive to work and find some early entries, and the overnight letter folks probably will have a few items for me.

Then the U.S.P.S. will dump a big load of cards off, if past years are anything to go by, and I'll be busy putting names in the roster. If things are as crazy as I suspect they might be, I won't get the roster updated on the T.I.V9  site until later this evening. Please be patient! I'll get to it as soon as I can.

So that outlines my big day for today, and my big day out with my son yesterday. More "big days" are ahead. Stay tuned......

UPDATE: The day just got a little bigger.... 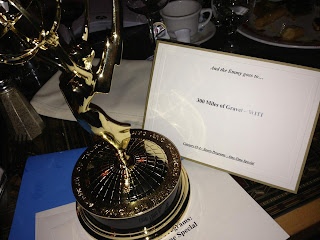 Trans Iowa V7 was filmed by Jeff Frings and made into the documentary film "300 Miles Of Gravel" which just won a Chicago Regional Area Emmy. Here is a part of the e-mail note I received from Jeff:

"Just wanted to pass along the fact that 300 Miles of Gravel won a Chicago  Regional Emmy tonight. I wasn't there, but I watched it online and posted it on Facebook."

So I wanted to post this to say thank you to all of the riders in Trans Iowa V7, David Pals, the volunteers that year, and the Grinnell Chamber Of Commerce/ Sheryl Parmely for making T.I.V7 possible and real. Thanks to Jeff Frings and his wife, and also to all those who helped make "300 Miles Of Gravel" a reality. I didn't need an Emmy to prompt these thanks, but it goes without saying that it needs to be done again for this unexpected turn of events.
Posted by Guitar Ted at 1:30 AM

@Josh Lederman: The filmaker, Jeff Frings, who owns the rights has not made the project available to the public to purchase. He had it shown on a Milwaukee T.V. station, and that is how it got the Emmy.

I am planning a private showing of 300 Miles Of Gravel at Europa Cycle and Ski soon. If you can make it, you can see the flick there along with a Tour Divide related piece. Look for details on that soon....

That is very cool... Congratulations Jeff, and also to you, my Brother! You gave the movie it's cool subject....

I'm working on getting online somewhere, but until then you can contact me via www.jefffringsphotography.com to get a copy
Jeff Frings