Fatbikes: Just What Are They For Anyway?

I was riding my fatbike home from work yesterday when "it" happened......again....for the umpteenth time. "Hey! What kind of bike is that?"

(Or variations upon that theme including questions about the tires, and where I got them, etc.)

So, I figured a lot of you folks visiting here probably are shaking your heads wondering what in the world all the fuss is about these enormously tired bicycles. I know this is true because of the questions I get all the time, and the fact that "non-endemic" media is coming around asking a lot of the same questions.

So I figured I would put this little ditty together for all of you that do not quite understand what all the fuss is about.....yet. Hopefully you will understand a bit more after this..... 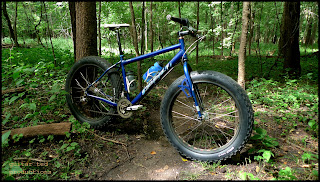 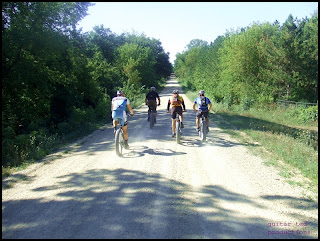 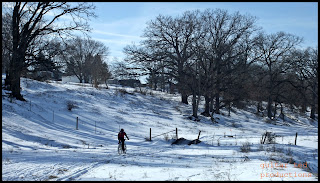 The bottom line is that these bikes are a fun way to get around. They may seem weird and unnecessary, but don't judge them till you've tried them. I can go on and on about these rigs, but most of the time it takes a personal experience on one to get the "light bulb" to turn on, and trust me- If you try one, that light bulb will turn on!

Oh, and that question I got? I stopped and answered it. The entire time I spoke with the gentleman who was asking me he was fixated on my front tire, ignoring the wails of his toddlers coming through the front door.

Never underestimate the power of the fatbike!

Indeed most folk cannot take their eyes off the tyres when talking to you!

I was grinning just reading this! -:)

You are overlooking another major benefit: some folk cycle to stay fit, keep the weight off. With a fat bike you don't even need to ride it, just standing near one makes you slim.

Yours sincerely
Charlie the bikemonger

I want one...and you just increased that factor by 10. Thanks :)

it's been my go-to bike for night riding. darn, i slammed into that large object i couldn't see! you can barely tell what you're riding over, nor do you need to care.

I hope the increasing popularity of fat bikes continues, because I really want one but can't really justify springing for one... perhaps if they get popular enough, prices would come within reach.

My dream FB would have studded tires to boot...

@RANTWICK: The aforementioned On One model is about the best deal on the planet right now on a fatbike @ $1300.00. Unfortunately the numbers don't justify mass production on such a scale that prices could be lower.

Same with studded fat bike tires $250.00each is steep, but reasonable seeing how the market is vs the quality of that tire.

I agree with everything you've written... I smile more, and love cycling more, now that I ride my fatbike the majority of the time than I ever have. After 22 years of racing bicycles, the fatbike has been a rebirth of sorts for me.

On a ride last night, MW and I were absolutely amazed once again at the stuff we were riding over without disruption of momentum. Roots, small downed trees, rocks, washboarded-out roads... We just rolled smoothly over it all.

@MG: Right on, Brother! I am stoked to know that you and mw are still energized by fatbiking and are enjoying cycling again like we all did when we discovered mountain biking.

I was riding in the Green Belt,(similar to what Wilderness must be like for you guys), and it was wet, muddy, and a blast to be out riding in the night. Just like I felt back in '89 when I started. So fun!

Nice post GT. We were discussing them on "Just Riding Along" last night. FullFace Kenny is all over the Beargrease and I tried to convince Andrea, but I don't think she is buying in....yet. http://www.mountainbikeradio.com/just-riding-along/

I look forward to "The Guitar Ted Show" Thursday night!

How do fatbikes climb steep slopes?

Are they better for climbing up a fire trail than say your average XC Hardtail?

@sdm: Climbing is a mixed bag. On the one hand, (if you use the right tire), the traction is amazing and you can climb up features previously unrideable. On the other hand, you are dealing with a bicycle that, (in most cases), weighs more than an XC/Trail hard tail and that weight will have to be dealt with going up.

So if you have the leg for it, yes- the fatbikes can climb well. Mostly due to the greater amount of rubber hitting the trail which increases grip tremendously.

I just built up a Necro in FLA. ( will never see snow, might see beach once a year, but will see swamp. )
Couple questions if you will;

What pressure do you run on XC?
Is there a pressure guage that Fatties use?
Front tire pulls to left when hit the brake. Is that normal? ( M Lite )
Considering Lefty fork, any thoughts?
Any steps to remove the grin form your face when you get out off the bike??

thank you for your time