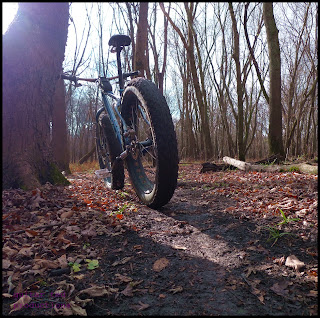 Wednesday I went up to Camp Ingawanis to ride again. I decided to take the Snow Dog since I had heard that more new trail had been cut and with what was already laid in, I figured the Big Fat Larrys would be a nice way to speed up the "burning in" of the new lines.

Also, it had been pretty wet Tuesday all day long. I figured that it might even end up that I wouldn't be able to ride at all. However; when I got there, it seemed okay, so I headed out into fitful bursts of sunlight and cool, crisp temperatures. I didn't get about 50 yards in before I noticed some bobbing white objects in the periphery vision. Deer! Three of them bounded off and deeper into the hardwoods.

Mindful that I may see more deer, I took the corners and downhills with care. I also was testing the soil for grip. It wasn't bad either. In fact, it was much better than I would have ever guessed, and improving with the day. The Camp has sandy soil, and it does tend to drain pretty well.

The Big Fat Larrys were gripping really well, but I knew the rocks and roots to come may be a different story. When I reached them, I took it easy so as not to slide out. Otherwise I was ripping fast on the fat bike. I suppose I would have had more grip with something like a Nate, but the rolling resistance would have been higher, and I didn't need the claw-like traction all the time. 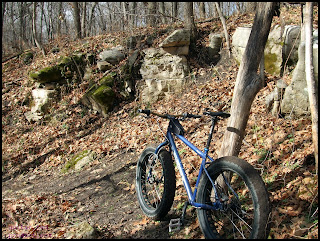 I got around the circuit to the point where the trail system dumps you down into some bottom land along the Cedar River. Here I stopped and walked about 30 yards to the bank and realized I could probably see the Eagle's nest across the river. As I spotted the nest I saw one of the mature Bald Eagles flying to the nest and into the enormous tree that holds the enormous nest.

Looking a bit more closely, I realized that the nest was nearly directly across from the confluence with Quarter Section Run. Pretty easy to find the nest in that big ol tree on the west Bank of the Cedar if you know that.

Then I went on further and found the newer trail cut in recently. It is going to really make a difference out there! One of the newer cuts has some rocks and out-cropping of rock along with some steeps that will be difficult to master in both directions. But that's okay. It'll make us better mountain bikers!

Then I went on home and started to swap out the brakes on the Snow Dog. I wasn't liking the way I was on the edge with the mech brakes out there at the Camp. Hopefully the new stoppers will correct that issue. They are hydraulic, and a lot lighter, at any rate!

It was a great day to ride, and I could stand it if this was the way it stayed outside till Spring, really.

Sounds like a great day riding,my friend. Most of mine's been gravel or paved lately-with my mtn bike still missing parts (donated to another bike),LOL,hoping to change that soon with a used 29"er SS project-bike headed my way as we speak,I need some trail time :p

i hit a bit of late night singletrack on my BFL's as well.