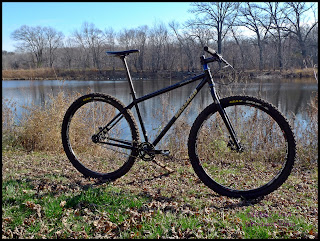 Yesterday was a glorious late fall day. Sunshine, little wind to speak of, and time off to get out for a ride. I decided to take the Vassago Jabberwocky out for a spin.

I dubbed this "Project Black" some time ago, and used it as a platform to (a) see what the fuss was about a Vassago and to (b) do a lightweight version of a steel single speed. I think I have succeeded in the lightweight department. Project Black ended up at 22lbs ready to ride, as you see it here. That's without any "stupid-light" stuff on it too. So yeah- I could easily take this lower.

That weight would come out of the wheels and fork. The Black Flags are decently light, but I have stiffer, lighter wheels I could use on it. The fork is a nice early version of a CroMoto Grande, which for a steel fork is light. However; a Niner Bikes fork, for instance, weighs almost half of what this does. So I could throw some money at this and get it down to 20lbs easily enough, but I ain't going to do it. Nope.

I like it fine as is, and I may not hang on to this bike all that long. I mean- I have plenty of single speeds! 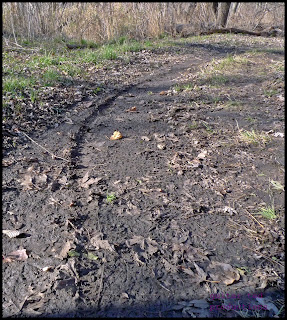 I decided to get out into the Green Belt for a spin. I didn't have all day to drag the rig up to the Camp, and this would be a good test for the Geax Gato 2.1"ers in slicker dirt, which I knew I would find in the Green Belt and not so much at Camp. I was not disappointed either.

The skinnier Gato tires are much like their bigger 2.3" siblings in that you have to run the air a bit lower to get the side knobs to work. It's a good thing I did run 'em lower too, as evidenced here by this sliding sideways mark in this curve. There was just enough side bite to keep it upright. Had the tires been pumped up a bit more, well then.......I probably would have went down here.

The Jabberwocky's longer chain stays probably helped a bit with the stability as well. Speaking of "longer", it is something the Jabberwocky is and you can tell this in tight turns. It isn't real adept at the tighter stuff, and that frame is a bit flexy when you are doing a slow speed maneuver too.

But the same flex that is a detriment there is really the Jabberwocky's best trait as well. The bike feels so smooth, and the lowered pressure in the tires made everything nice until you hit some real bumps in the trail.  Then you'd become aware again that the bike is fully rigid with no suspension to absorb that impact. In fact, the whole bike does this shudder/ringing thing when certain hits are encountered. It's kind of weird, really. I've never had any other bike resonate like a low frequency tuning fork before. Other than this, the Jabberwocky ranks right up there with the smoothest feeling steel frames I've ridden.

In terms of handling it seems to be okay. It isn't a very exciting bike to ride. Very smooth, very stable, and it seems very happy to keep both of its wheels firmly planted on terra-firma. If I had to ride a smooth-ish course for hours on end, I might choose this bike to do it on. If technical features, rough single track, or snappy handling are called for, I am going to reach for my OS Bikes Blackbuck, the Milwaukee Bicycle Company 29"er, or the old Salsa Cycles El Mariachi. If things call for a slightly more stable rig with great slow speed, technical handling and decent steel feel, I would opt for the Sawyer. All of those aforementioned rigs do front wheel lofts and snappy feeling accelerations better than the Jabberwocky does.

That's not to say that the Vassago is bad. It is more correct to say that it rides maybe like how a 70's steel Columbus SL tubed road bike rides in comparison to modern road bikes. Sure, it is smooth, but it isn't as snappy as a newer rig, and isn't as exciting to ride, maybe. If that makes any sense at all.....

Anyway, I ended up riding a loop through the old connector trail I made that runs along Ridgeway Avenue on the North side of the road. It's still all there. Funny that, since back when I made it, I couldn't hardly get anyone to help burn it in, and I gave up on it. Some folks dubbed it "Marky-Mark". (I got some help making the trail from another Mark) Kind of weird to ride a trail named after you.

So, back to the bike, eh? The Vassago is merely "okay". The "Wet Cat" geometry is about as attractive as its namesake. Stable to a fault, low-ish, long, and not conducive to getting active with your riding style like some bikes are. And that's okay. It is different. It just is not my cup of tea as far as grabbing this over other bikes I have sitting around. I'm glad I tried it. I am happy with how the build went and with the weight. I'll have to think it over for awhile and see what I want to do with this thing. I think I already have a pretty good idea what will eventually happen here!
Posted by Guitar Ted at 1:30 AM

"I'll have to think it over for awhile and see what I want to do with this thing."

You can certainly send it here to eastern TN :p

You described Wetcat's ride to a tee,Mark-some love it (I do),some don't,I guess. Everything you said also speaks pretty much for the geared version (Bandersnatch) as well. Nice to be hearing that Vassago's back at it,methinks,since I miss my Jabber enough to build up another,I'll have the chance next year now :)

Let me know if you are thinking of selling it!

Marky Mark lives ...something that the dear and the guys from the Twisted Spokes - your shops racing team have been committed to maintaining. A great little traill. Thanks.
John

Sounds like a Jabber would make a great counterpoint to my Nimble 9, which is much more playful by design. One is for the tight twisty rough stuff (with a squishy fork), and one is for longer smoother rides (with a rigid fork)...