A Rejoinder To The Ponderer 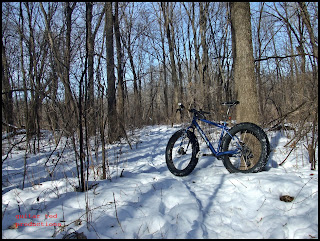 Recently a dust up of sorts has blown up over a post done by Bike Hugger's main protagonist, Byron DL, who had this bit published on "Wired" recently.  (I recommend you read it to help make the rest of my post make sense.)

In the article Byron "ponders the point" of "snow bikes", (a term which is rife with misunderstandings right up front), and goes on.....well, go read it by clicking the link above!

Byron happens to also be on Facebook, and messaged me for my response to the article, knowing I was a fan of this sort of vehicle. I have decided to take the liberty of posting my entire response, verbatim, which I present here today. A couple of things to note...

"My take? Well, you raise some points that found me nodding my head in agreement, but you also seem to have some feelings that I find contrary to the experience of riding in conditions that are otherwise unrideable with "ordinary mountain bikes".

You seem annoyed by the slow, mind numbing pace of the riding, the high focus on handling, and some technicalities with components. I ask you- would you rather be riding rollers/trainers? For many, that is the only other option at times.

I also find that the high focus on handling actually pays dividends when I do get back on my "typical mtb" in the regular season. In this sense, I get a benefit, albeit not an immediate one. The bikes are heavier- this makes me stronger when I ride my other bikes. The bikes have technical challenges now- but as you point out, with refinement, you will see those overcome. (By the way, Grip Shift is the bomb on a fat bike with thicker gloves. )

The slower paced riding is actually peaceful, and not unlike what one might experience while hiking- only you are riding a bicycle. I am not holden to the belief that speed "has to be" a part of an enjoyable cycling experience, but many are. I get that, but I don't think everyone is this way.

Furthermore, I have witnessed first hand how many first time off roaders are tickled to death to find such a stable beast, which a fat bike is, which slows down the need to react to inputs, and is giving them traction for days in corners and on climbs. In this sense, it opens the off road doors to folks who are otherwise terrified of many of the mountain bikes you specifically call out in your piece. The "ATV" of mtb vs the "Honda 250 motocrosser", if you will.

That said- yes- they could be better, and I think companies like On One, who developed their fat bike with trail riding in mind, are on the right track. It also is interesting to note that J&B Importers, who have the house brand, "Origin 8" are coming out with a fat bike exactly as you have envisioned, (albeit heavy), by the way of the introduction of the Nuvinci 360 hubbed "Crawler", available in April.

I feel a front suspended, 3"-3.8" tired, fat bike with trail geometry would be the best representation of a bike that would bring a different flavor to mountain biking. I feel there is potential there. (Check out the Belgian brand, Sandman, for where I think this is going)

Anyway, I think there is much potential for a larger audience for these bikes, that isn't the "typical" 5 inch travel mtb freak of today." 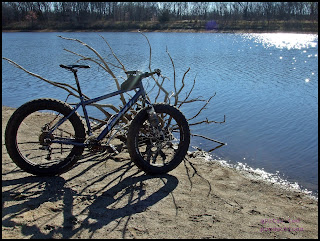 As a follow up to the above, it should be noted as well that there is more to riding these fat tired bikes than snow. I know- most of you folks landing here "get that", but it needs to be drilled again to underscore the point.

Are fat bikes better or worse than mountain bikes? Well, first off, they are mountain bikes. Secondly, while they are not the best for going really fast, dropping in a 12 footer, or for climbing as fast as you can go, they will cover much of the same territory as most mountain bikes, just differently.

It is that "difference" which likely appeals to those fans of fat bikes who are willing to accept the short term limitations to the genre for the immediate benefits of this type of rig. Can they be better? Sure they can. I suspect "fat bikes" will become something a lot different than we know them as now, much like  a 1980's era "mountain bike" is not very similar to the modern incarnations of the genre today.

As if on cue in terms of the above statement, SRAM officially announced their fat bike crank offerings yesterday. I see that as just the tip of the iceberg, as it were, in fat bike refinements. Time will tell, but I don't think the "Wired" piece is as negative as many seem to think it is. A bit misguided or misinformed? Maybe that, but certainly there are some points there that make sense, and given what I think will happen, in the end, it won't be a big deal at all.
Posted by Guitar Ted at 1:30 AM

I bought my Mukluk with the plan that if I didn't ride it enough, I would sell it off. I have kept it in the stable for many of the reasons you mention.

It does slow me down. I tend to ride fast a lot of the time. My Muk makes me stop and smell the roses a bit more. It's actually a great bike to ride when you have someone with lower fitness on a lighter bike. When my wife rides, I tend to take the Muk as her fast speed is a good workout for me on the Muk.

It also invites adventuring and discovery. I've turned off of a paved or dirt trail and dove into a field or followed a deer track many times, because I could, and I knew there wasn't much that would prevent me from riding.

Sand. Lake shores. Riverbottoms. Dry creek beds. I ride my Muk as much if not more in the summer and fall than the winter just to do this type of riding.

I don't see what he was that afraid of...http://i.imgur.com/lNK3UBO.jpg