After nearly being 95% snow free, we got another dumping of the white stuff last Wednesday. Then it got brutally cold, and I was under the weather to boot, so this past weekend was the first time in several days I was able and fit enough to get outdoors and enjoy doing some things.

One of those things was to go sledding with my Son. We went to a place we both know we will have the hill all to ourselves and while that was fine, the snow was thinner here, so it wasn't as fast as it could have been. Still- we had a good time. I got the distance record this time, as my Son couldn't quite get there. Oh well, it's my first time winning that contest all Winter!

The sledding outing was really the first time in awhile, besides snow shoveling, that I've had any outdoor activities since it snowed and iced up before that. I was thinking on riding the bike on Sunday, but after coming home from sledding, I was feeling overly worked and was thinking I may still not be ready for a big bike outing just yet.

Sunday came and it was my turn to play the guitar at church, so that was the morning right there. Played the '88 Strat Plus this time, by the way. Then I had some free time in the afternoon, and I didn't feel too bad, so.... 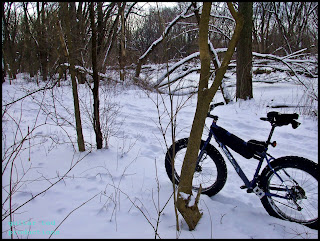 I knew that a few guys were supposedly going through the Green Belt on Saturday, so I figured I would go check that out to see how they fared. I went over on top of the dike and that went well, since the snow wasn't too deep up there. Then I dove down into the opening trail of the Green Belt and found a trail all worked over by snow shoes and feet.

Normally this would be good, but again- this snow- like the last, was all powdery and sand-like. There was no packing down of this stuff, and the going was slide this way, then that way, and I decided to bail on that after a bit. I made an exit at the point where the dike goes East to the bike trail and picked up a snowmobile track, which was pretty good and fast. Then I hit the bike path, and I was feeling a bit too fatigued for only having been out as long as I had. Just then, I got a phone call from California which took several minutes. By the time I wrapped that up, I was a bit chilled, and decided to head for the shed.

It wasn't all roses going back either. It was really soft, shifty snow, and the fact that the temperature had risen above 20°F made the packed sections of snowmobile track really sketchy as well. In the end, I found out I was out for two hours anyway. Good enough for a start, or "re-start" of the year's riding, I should say.
Posted by Guitar Ted at 1:30 AM