That Wasn't For Me 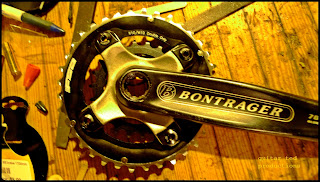 Regular readers here may wonder why I have not posted much on my titanium Mukluk of late. No......I did not sell it. I single speeded it back in November, and after riding it twice that way, I decided that it just wasn't for me.

Of course, I did ride The Snow Dog a lot, since I was training for Triple D, and afterward, I just kept on riding it. (When I wasn't sick, which has been most of February.) Another thing folks might remember from way back last Fall, and that was my bikepacking plans. That was going to happen on By-Tor, but due to family issues, I had to abort the plan. Now I have been formulating how I want to return to the bikepacking idea, and how I might make By-Tor a better rig for that activity.

The bike has been a 1 X 10 for most of its time with me. That was "okay" for gearing, but 1 X 10 is a bit limiting if I want to go to places that are further afield and/or have tougher terrain. Unloaded, the titanium Mukluk was fine with that 32 X 36T low gear. However, loaded up, I may find I need something less stressful than that gear. In comes the FSA double ring set to the rescue. It has a 36T big ring and utilizes a matched 22T granny which works with it. Obviously- much lower gearing is available there, and a bit taller on the other end as well. The 36T X 11T combo should be more than fast enough.

The FSA kit came with the two rings, special "ears" that make the spider look complete on the outside, and all chain ring bolts, which are Torx 30 fastners. This kit is tailor made to turn a triple into a good looking double.

The rest of the outfit will include a SLX direct mount front derailleur, and an XT DynaSys Shadow Plus rear derailleur shifting that 10 speed rear cassette. Initially I will keep the fat tires on until later in Spring when things begin to dry up, then I may have a surprise wheel set to spring on everyone that I have been contemplating for this specific task for some time.

If everything comes together as I hope, this will see duty on an epic length event soon as well. I am sure it should all pan out, but there are many peices that need to fall into place for all of this to come together. I'll continue to update this as things progress. So, while the single speed Mukluk thing was cool and all, I found that it wasn't as ideal as the set up the Snow Dog had, which was far more useful to me.

Speaking of The Snow Dog, it is high time to upgrade that bike's drivetrain and shifters as well, so look for those things to be written about here as well.
Posted by Guitar Ted at 1:30 AM