The bike in the image here is representative of a model of bike from Bruce Gordon Cycles called the Rock & Road. This is a seminal bike from the standpoint of 29"ers, (which you can read more about their history here), but it also was a bike meant to go on off road rides and- as the name implies, on rocky roads. You know.........like gravel.

Well, this wasn't lost on Mr. Gordon, who saw all the gravel grinder stuff popping up, and in order to acknowledge this, and point back to his own contributions to the genre', he is offering a 25th Anniversary Edition of the Rock & Road dubbed the "O.G.G. 25". (that stands for "Original Gravel Grinder 25", the 25 signifying the 25th anniversary of that model. ) Mr. Gordon is only going to make 10 of these rigs and you can get one by calling him up to get the ball rolling. Bikes made in this series will all be signed and numbered. Sounds pretty special! See the details here.

Axle Options:
I was thinking the other day- why do we even bother with 9mm QR's and 20mm through axles anymore? For anyone that isn't racing, self supported, and that doesn't need to get a wheel out in a nano-second, (read- almost everyone.), the 9mm QR for mountain biking is.......silly.

Then there is the 20mm through axle- a fine and dandy idea in its day, but for whatever reasoning, Fox and Shimano conspired to effectively kill it for anything outside of down hill sleds. The resulting 15mm through axle standard is okay. But, since it has basically pushed out 20mm through axles, lets just go with that... 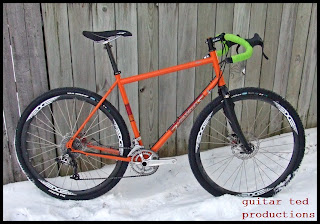 Looks like a wet, windy, sloppy weekend is in store for us here. I have been wanting to get out the new-to-me Vaya but my body isn't cooperating very well right now. I have had a wicked head cold and mild flu, so riding has been not happening of late.

Let's say I feel a lot better by Saturday. If so....and that's a big if, I will get that Vaya out for a short cruise. I sure hope that works out.

There are other bikes I need to be getting out and riding, but it all depends upon the weather. If it turns, all the better, but I do realize that it is only early February. So, you know- I am being a bit premature on this Spring-like weather, perhaps! Be that as it may, this "tweener" weather is for the birds. Not really winter, not good enough to be out on the trails, and we are left with crapola. (That's a technical term- by the way!)

Okay, I hope all of you have a great weekend and get some good outdoors time in.
Posted by Guitar Ted at 1:30 AM

I agree with the front axle stuff, 15mm is MUCH better than 9mm. Never used 20mm stuff. I think an alloy 20mm axle would be lighter than the 15mm axle, but I'm not going to make my own, so thats what I'll run.

For the rear if it was 15mm, would a 11 tooth cog fit with the bearings?

@Michael: Yeah....it probably doesn't work with a 11T cog, but I don't think mtb riders really need a 11t cog either. ;>) I'll have to check on that when I swap out a wheel here in the next couple days.

I agree regarding the axle standards. I have 3 sets of wheels, all of which have different axle "standards". The worst part is, I can only use ONE wheelset on each of my bikes! For anything outside of DH, make 15mm the standard...PLEASE!

I'm probably revealing my ignorance here, but were the bigger than 9mm axle sizes driven by need (as in, 9mm axles failing during use), or by manufacturers needing something bigger and better to sell? I've not seen a 9mm axle bend without also tacoing the rim, so i guess i never saw a need for a stronger axle...

@Hook: there are a couple of reasons. First of all, through axles have been proven to stiffen the traditional suspension forks legs significantly. (You can also achieve similar results with a bolt on wheel, or by using DT Swiss' Ratcheting skewer system) Secondly, it helps prevent the wheel from shifting in the drop outs under hard braking on disc brake equipped bikes.

Don't worry GTed, they will come out with 14 mm because it is lighter and more awesome :) oh and you will need a special tool too.
11 tooth not needed for mtb? I kind of agree but with everyone going 1x10, 1x11 this gives them the ratio. Personally I think there is way too much cross chaining and now more wear for the 11 tooth. Maybe we need an electronic sliding front chainring that adjusts chainline kind of like Di2 trim.... and another special tool :)