Thoughts On Weight From A Fever Addled Brain

Weight- It's a big deal, a hotly contested subject, and gets folks all in a dither. I've read many opinions on weight, from a total dismissal of the subject to folks who are so into getting the lightest bike they will sweat the finest details to achieve their goals. I've seen folks spend exorbitant amounts of money to prove a point, then sell the bike almost immediately afterward.

My take is that the truth is somewhere in the midst of all that debate. Having the lightest bike is not good, and neither is having a really heavy bike that is hindering your enjoyment of the ride. Like anything requiring balance in life, it is not easy to find the place where weight, (or lack thereof), is at a place which neither hinders you nor causes concern for parts breaking, loss of handling performance, or a credit card drained to the limit. 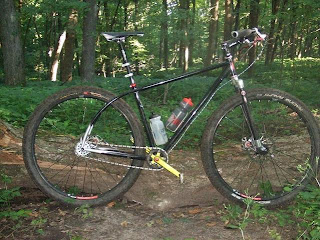 One of the best examples of this was back in 2008 when I was doing a lot of riding on my OS Bikes Blackbuck. Now the Blackbuck isn't the lightest steel frame on the planet, but it isn't a porker either. Pretty good, I'd say. Right in the ball park for a eccentric bottom bracket equipped 29"er.

I used that basic platform for testing all sorts of rigid and suspension forks on one bike. So- the wheels, components, and set up had to remain the same, (or as nearly the same as possible), for the duration of the test. The wheels I used were the stock set off a Raleigh XXIX+G and were not light. Nope. They were in excess of 2000 grams for the set, as I recall, but those Joy Tech hubs just rolled super smoothly. Plus, the WTB rims were stout and stayed stable all throughout that year.

The following year I was finished with the fork testing, so I removed those "old, heavy wheels", and put on some different, high dollar, lighter wheels. You know what? I didn't go any faster, nor did I like them better than those cheesy Raleigh wheels. But I do remember liking the feel of that bike very much back then. No matter that it weighed more than many other "blingy" single speeds out there.

So what was the deal? I think it had a lot to do with every component I set the bike up with for that year after the fork test. They all worked in concert and put me in a position to really get the most out of the Blackbuck. You know, I should build it back as close I can the way it was then! But the point is, I didn't need lighter weight. At least I don't think so.

But then again, I've had a low grade fever and wicked head cold the past few days, so I might be crazier than usual!
Posted by Guitar Ted at 1:30 AM

Yes indeed Gted. This topic is almost a disease for some, or at best the magic panacea that everyone looks for and the marketers' push. It always makes me smile when I ride past the latest blingiest road bike the weight of a feather on a 'sub standard' few year old steel MTB. Oh and don't mention steel to the feather weight freaks I know, they think your mad.
I must admit I do take note of the weight of my tyres and wheels to an extent - as long as they are functional and durable to go with it. As per your previous post, things need to be matched to the rider and purpose, along with the budget.
My tip is never to ride a really neat light weight bike so you never really know what advantages you may be missing out on.

Whilst we can buy light frames etc like the pros ride, are they really appropriate for the mass cycling community? I don't think so and the amount of warranty returns on light weight gear may help to prove this...

I'm surprised, as I've always felt a lighter wheelset translated into a noticable difference on the trail. Maybe that "difference" didn't necessarily mean faster or a better riding experience, just different. Or maybe its the hubs instead of the weight...who knows. I personally won't ever be rolling on one of those $1000+ wheelsets though, regardless of my budget.

Low grade fever and splittig headache here too. Time to open up that bottle of scotch I got for xmas.
get better.
ari

I personally put more emphasis on the "motor" and the weight that it may put on or take off :)

Funny that you mention those stock WTB/Joytech wheels on the older XXIX - I have those same wheels and have ridden them hard for years! The inexpensive Joytech hubs roll SO smooth and the wheels are very durable. I have other sets of more expensive wheels, but these things hold their own!

I think weight matters to some extent but I hardly give it any thought. I usually check the weight of tires before I buy them, but it isn't the only factor that persuades me. Tread pattern and volume are more important.

Some people go really crazy with the weight weenie stuff, and it seems pretty ridiculous when you realize how much money they're spending.

I've had the experience of ruining the feel of a bike I love with a change in components be it wheels, seatpost, handlebars or whatever. I have one bike that is pretty porky in weight but for whatever reason everything just works great together so I'm happy with it as it is.

I think if most people took the money they were going to spend on some fancy component upgrades and went on a cycling holiday instead they might be happier in the end and maybe even a bit lighter themselves.

As I a previous commenter suggested it is far more important to focus on the weight on the rider.The best way for me to shave a few grams off the total package (bike + rider) is to not eat the extra burrito the night before. :) About a year ago a co-worker asked me to tune up her bike. It had been neglected for years. However, in a matter of minutes it was running great. In a test drive around the block I was amazed at how smooth that old steel schwinn rode. This experience really opened my eyes. As you previously posted riders need to match their true need to the bike/components. Thanks for the post.

FWIW, I dropped 300 grams of weight when I changed to a nicer wheelset on my road bike a year or so ago. I did not notice the weight difference as much as the stiffness is corners.