After last Fall's initial recon of the T.I.v13 route showed that there was a bridge out in the first segment, we knew that there would have to be a reroute, at the least. I didn't figure on scrapping the entire segment, but that's what it took to make it all work out. In fact, this was the third draft for the beginning of the event.

It was a bit more difficult due to the fact that the rest of the route had been determined, with an additional few miles added due to another reroute. That kind of ties your hands since the reroute for the opening segment has a pre-determined start and ending point with a limitation on mileage, which I don't usually have. Typically I make the second segment fit the first, the third fit the rest, and that is that.

Well, I am sure no one cares about all that detail, so here is a bit of a reaction to what I found out there yesterday. I managed to squeeze it all into the morning hours so I didn't roach my entire day doing recon. That was nice!

So, obviously we are starting out of Grinnell, and I know it may seem impossible but we are leaving town on an entirely new route. So, there is that. Then things go kind of flat in the opening miles. Well.....not totally flat! Gentle rollers? Okay, yeah, we will call them that. Essentially, the opening miles will probably be fast and furious due to the lack of anything holding you back, unless, of course, the weather is craptastic. Then all bets are off. Especially since the area around Grinnell is predisposed to becoming peanut buttery in consistency, with regard to their gravel. 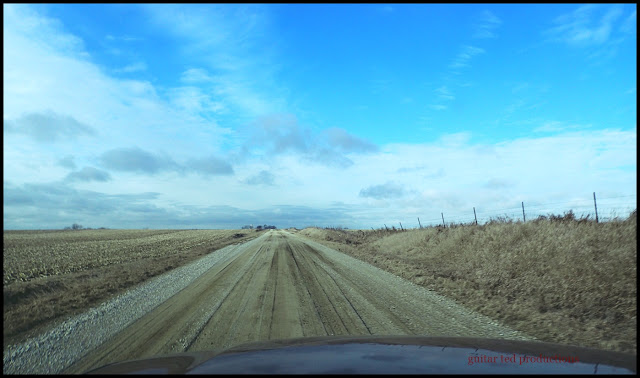 The roads yesterday were rutted badly since we've had a lot of wet weather and now it has frozen. The truck wanted to jump around and jerk the wheel out of my hands at times. Once I figured out how to navigate all that it wasn't at all bad for the last 2/3rds of the route. The route..... Yes, there are several roads we've used for Trans Iowa before. Most of these haven't been used in years. The back 1/3rd is all new. So, it was fun to get into an area I haven't been in yet. As far as how these roads are now, well, we cannot take much from that. You know, if you've been in Trans Iowa before, that roads will be changing right up to the moment that we use them. To speculate upon how they will be based upon how they were yesterday is not an indication of what your reality as a rider will be.

The hills eventually do kick in and there are the usual doozys and  leg busters to be sure. However; this first leg will be shorter than it has been in many years. Most of the time we are looking at around 50-ish miles, but this year it has been pulled back to a hair over 46 miles. That means the cutoff time will be shorter as well. There is one Level B Road, and it is only 3/4's of a mile long. I didn't get to see it yesterday, as I couldn't take the time to walk it. It was too wet/muddy to drive on. I think that the only thing that could really slow riders down is the weather, which I have no control over, so... Initially I am thinking 8:15am for a cut off to CP #1. Traditionally that segment has always been timed a little more stringently, and for a few years I got a bit lenient and everybody was getting through. That tells me it isn't a big enough challenge.