This weekend I took advantage of the current situation to get out on the gravel again. It has been a while and it felt good to get back out there. Having been sick for almost a month to kick off the year didn't help any, but given that conditions pretty much were the worst for cycling that I could imagine, I wasn't too put out by having missed the month of January and part of February in terms of riding.

Now I am in rebuilding mode. I had to be careful not to be the "dog off the leash" and cook myself back into relapsing or injure myself with some stupid big, high mileage ride out of the gate. Although it was hard not to keep going, I reigned it in. It is especially hard when younger folks are out crushing big miles right now in this weather, but I have to be smart, not satisfying my desires and ego. The big rides will happen. I just have to make good decisions and be patient.

Okay, well- enough of that! I figured that it has been a while since I had done a "Country Views" post, and since I found something interesting to share this past weekend, I figured now would be a good time for these posts to kick in for 2017.

I started out the ride with the temperatures in the upper 40's. It was supposed to get into the 60's, but I didn't know if my morning start would see me getting a chance to feel that out there. When I got up near Bremer County, I was cooking with my Bontrager wind jacket on, so I stopped to shed that layer and stow the jacket. Turns out that a wool long sleeved jersey and bib tights were enough. In fact, by the end of the ride I could have been riding in bib shorts.

Traditionally, as we all know here in the Mid-West, it isn't like this in mid-February. Typically we are getting Alberta Clippers, snow, and we see an occasional dip below the zero degree mark during the month. In fact, traditionally I have shoveled more snow, living in this part of Iowa, than I do at any other time of Winter. So, when the shovels have set idle all month long and the temperatures soar into late March territory, you take advantage of that. There was no way I wasn't going to ride on Saturday.

The thing is, traditionally Frostbike happens right at this time as well. It used to be a "can't miss" event for me. However; as with anything else in life, things change, and now Frostbike is just a mildly interesting facet of the bike industry calendar. Anything that is "new" these days doesn't get introduced at a show. It gets "press released" whenever it is ready. So, almost anything noteworthy has already been revealed long before, (or as in the case of the Salsa Deadwood and Surly's Ogre, right before) the show. Going to see what is new is not a reason to go anymore.

I used to also go up to spend time with friends that have moved on to new things and are busy with the show proper. None of them would really have had the time these days to spend with me, so going for that reason is less of a reason to go now. Added to that is the fact that I would have to drive 8 hours minimum to be at a show for maybe 5 hours. That's a total of 13 hours shot when I could be riding in 60 plus degree weather and then grilling out and eating food with my family. So, that decision was a no-brainer.

Now when I take off and ride North of Waterloo, I generally have to get up into Bremer County North of Highway 3 before I get into roads I am not all that familiar with. I don't expect to find much of anything that I don't know about already if I am South of Bremer County, as I was on Saturday. However; I surprised myself by discovering a mile section of road I have apparently not been on before. I noticed a cemetery gate on Gresham Road and stopped to see what it could be.

Ironically enough, it has a relatable story from today's headlines. That would be the poor treatment of immigrants. Check out the following closeup of the sign posted on the fence...... 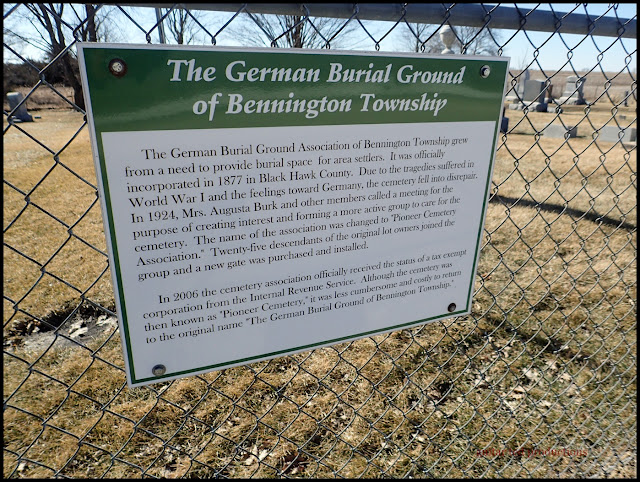 This was a new one on me. I know that there are many cemeteries in the rural areas of Iowa, but I figured I knew where most all of the prominent ones were in Black Hawk County. Guess that I didn't! So, good history to know and the first cemetery gate found during riding in 2017 that I haven't seen before.

I turned and came home on Sage Road and back eventually to Waterloo. It was a good chunk of miles done at a good pace. My shoulder was fine until I hit pavement, then it ached. Weird. Well, at least I am getting the fitness headed in the right direction. That's a good thing! Stay tuned for more "Country Views 17" posts later on in Spring.
Posted by Guitar Ted at 1:30 AM