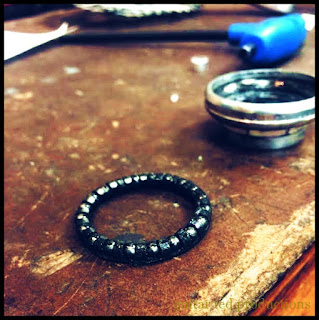 Yesterday I just finished up with my last Mechanics Class for the year. I had a four hour class which was held twice with two different groups of cyclists/students. I taught them the basics of bicycle mechanics, how to tune up their bicycle, and some tricks of the trade I've learned and used over almost twenty years of being a bicycle mechanic.

I'm sure the students learned a lot, and if I take their comments after the fact to heart, I would say that they actually did learn something or three along the way. But what they didn't know was how much I learned teaching them.

The classes were attended by more women than I expected. Fully one third of the total number were women. That was very heartening and, I might add, exciting from my viewpoint. I was stoked because it showed me that several women were not intimidated by the shop, or signing up for classes, and that they wanted to learn. I also was stoked on every class attendant's willingness to learn, by the way, but in this day and age where you hear all kinds of chatter this way and that about how shops are or are not doing a good job with women's needs in cycling, well...... I guess the shop I work at is doing a pretty fair job in that arena.

So, I learned that.

I also learned that people around here don't mind getting their hands dirty. That's good to see. The students dug in and worked with their bicycles and were getting knowledge built through doing. But more than that, I learned that there is a certain joy in giving away knowledge and wisdom gained through a lifetime of work.

I could be like so many mechanics who begrudgingly give out snippets of information, or who won't teach the tricks of the trade for fear that they will lose business or......whatever it is they are afraid of. I don't know. I guess I don't see it that way. I learned something quite different, actually. I learned that when you share some good information people actually respect that and trust and relationship in terms of the business actually grows stronger.

So, those are a few of the things I learned from teaching. I hope to continue that and learn even more.
Posted by Guitar Ted at 1:30 AM

Great insight. Teaching is one of the greatest things you can do. It is one of the most satisfying things that I have the opportunity to do in my job. Someone will always have to take our place in our work. Teaching them to do it as well as you do or better is what we are here for.