When I started this blog over ten years ago, I stated that it was a "Bicycle and guitar oriented elixir....". Well, the "guitar" part sort of got pushed out by the bicycle stuff, but I've always been playing. In the Easter post, I mentioned playing my '90 Strat, and someone suggested I detail the fleet, so here ya go. Hopefully ya'll enjoy the change in pace. I'll post something periodically throughout the year. Here's #7

So, yeah.......I also play bass guitar. This isn't the first bass I've owned either. I used to have a Fender Squire Precision Bass once upon a time, but I traded it, or sold it, I cannot recall at this point just what happened exactly with that one. At any rate, it was also black, but it had a white scratch plate and only four strings. I went without a bass for several years then. What happened next to bring me into "bass ownership" again is the story behind this particular bass.

Back in 1997 or so, I became the sound man at the church I attend. They needed someone with a a good ear for tuneage and a basic understanding of sound mixing, which I had both of. So, I became the "sound guy" and I had to attend all the practices so I would understand the coming weekend's set and also to facilitate the practice. 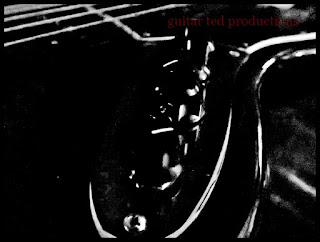 "Hey! You can play that thing!"

So, I became the bass player shortly afterward. Trouble was, I didn't own a bass! The church did have its own rig. A red Fender Precision and a beat to hell Yamaha bass amp. I was allowed to take the red bass home to practice on weeks I was to be the bass player and I plugged into my solid state Marshall practice amp. It wasn't ideal, but hey! You do what ya gotta do.

Then, I got married to the now Mrs. Guitar Ted.

That figures into the story here because it was our marriage that provided us with the gifts that were in monetary form which in turn was partially used to purchase the Fender Jazz V Bass seen here. I used up about half the money and Mrs. Guitar Ted the other on a violin case and some other bits for music.

When I stepped into the music store to purchase a bass, they told me I may as well get a five string, because if I didn't, I would wish that I would have. So, I took a liking to this black one here, and then I told them I'd take it, along with the included gig bag. Well, when they went to fetch the gig bag, they found out that they were all gone. The sales person hemmed and hawed a bit, then decided to just give me a USA hard case for a Jazz V instead. Bonus!

So, that's my story on my bass. I get to play guitar at church most times now, but the bass gets pulled out about six or seven times a year, at least, for substitution gigs where no other bass player is available. This bass also got me into a band for a while in the early 2000's. We actually played out a couple of times! Finally, I was tutored a bit by a local musician who had a really great resume and was a well known bassist/keyboardist/vocalist in the region. He asked me up front, "Hey, ya aren't gonna use a pick with that thing, are ya?" When I replied, "no", he was okay with sharing his tricks with me. I doubt he would have had I said I was going to use a pick!

So, while the bass isn't my "first instrument", it has provided me with amazing opportunities, relationships, and musical growth I wouldn't have otherwise obtained. For that, I am very thankful to occasionally hold down the bottom end.
Posted by Guitar Ted at 10:29 AM