Well folks, "that time of year" is over. Interbike, the industry trade show, ended, and I didn't go......again.  I used to go every year for the defunct "Twenty Nine Inches" site, but I stopped going in 2014 and haven't been back since. Now when this time of year comes around I start to think of the things I liked and disliked about going to the show.

Number one on the list of dislikes has to be getting in an airplane. I get it.......you have to fly to make travel make sense, but I just dislike airplanes and everything about the process of flying. Being canned into a small space with no freedom (relatively) to move makes me think that this must be what it is like to be a dog in a kennel. That lasts for maybe 3.5 to four hours and then you have all the shuffle, hustle, and bustle of getting into and out of airports. That would have been worse, for me, this year, as Interbike went to Reno, Nevada, which would have added even more complexity and airport transfers to a flight itinerary for me.

I didn't like being away from my family either. That's never fun, and when I went to Interbike all those years it was in Las Vegas, which kind of amplified those feelings of missing my family even more. The whole "Las Vegas experience" was a negative one for me. Sorry if you live there and all, but I just wasn't into it. The only saving grace I could find was Great Buns Bakery on Flamingo. Check it out if you ever find yourself out that way.

Pluses were seeing bicycles, riding bicycles, meeting old friends, acquaintances, and meeting new folks. A few nights out were notable...... That's about all. I could do without it since the negatives were outweighing the positives, which honestly, I could get elsewhere without all the hassles of air travel. Add in that the show itself was contracting at an alarming rate and the appeal was just not there anymore.

I hear this year's show was tiny compared to ten years ago. If that is true, boy! I am really glad I didn't make the effort to go again. 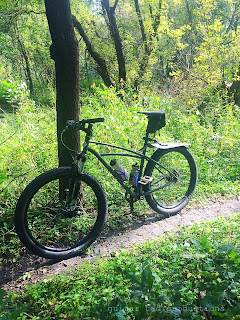 I wrote about my Sawyer a while back, wondering if I shouldn't just get rid of the thing because I rarely ride it anymore. Then I got it out and started riding it again. I'll be danged if I didn't end up really liking it........again.

At work there is a take-off set of 27.5 X 3.0 WTB Ranger tires on WTB Scraper rims from a Fargo we switched out wheels on. I rode the Sawyer in and did a little test fitting. Amazingly, even with the wide Scraper rims, the 3.0 tires cleared. Not with any appreciable mud clearances, but they cleared. If I could run the sliding drops all the way back, I'd be better, but the gates Carbon Drive belt won't allow for that. I'd likely have to commit to a 1X drivetrain to get that right, and that would make more sense anyway.

The downside is that I would have to go with the original rigid fork, or buy a brand new fork from Fox, since they do just about anything in straight steer tubed forks if you want it. Or get some other brand that isn't quite as good. The straight 1 1/8th head tube really keeps my choices limited. One cool idea I had was that I could use my idle Ti Mukluk uni-crown steel fork and get a wheel built up for that using a 27.5" hoop. I have the hub, and the fork has Three Pack bosses on it, so that would make for a cool set up with fat 27.5" rubber.

Then again, I could just get a new set of 2.8" tires and ride this as is. Cheaper and less fuss. But it is fun to consider possibilities and since this bike is so fun and has versatility, I figured I better keep it around. Not to mention its cool frame, which I have waxed poetic about here before. That said, I found a story about how Merlin, freshly sold to Dean Bicycles, is going to make the Newsboy again. That was a titanium framed 26"er cruiser bike from the 90's that was a cult classic. This new one will be a 29"er, but that's not why I was intrigued by the story.

The story told of how the cantilever stays took a week to bend and fabricate. I've said that the Sawyer's frame had to have been a money loser for Trek, because of the complexity of the Sawyer's frame tubing. The bends in two planes, and all the details in it. Well, that Merlin story confirmed this to my mind. Consider that if you want one of the eight frames Merlin is going to make you have to pony up $5,000.00. That's not with a fork either! Makes me think that the Sawyer should have been a really expensive frame. Not 5G, but in steel, it would be less. I bet it would cost 2G plus to have a person make you a copy today.

I think I'll hang onto this ol' bike.

I'll tell ya what..... We've had a LOT of rain in September here and it has just about killed my riding opportunities for now and the foreseeable future. Especially for off road. Gravel travel will bounce right back, but anything else is going to be tough sledding for a while.

With the prospects for a shortened Fall mtb season upon us, I am looking more and more at my fat bikes for some off road salvation. Trails will likely be a mess once things do dry out around here, so fat biking makes a lot of sense when you've got debris, muddy patches, and softer trails anyway.

I'm happy and satisfied that I have that ol' Blackborow DS sitting there in the shadows waiting to roll out when the time comes. I must say that I was a little apprehensive about getting a fat bike with only two gears. But I haven't had any issues riding it around these parts this way. So, it remains a dinglespeed. In fact, the drive train hasn't been touched besides having the occasional cleaning and lubrication done to it. Low maintenance and durable.

Anyway, it should be good to go here after a brief inspection and clean up from last Winter's abuse. While I have been really happy with this bike, it has been on my mind a time or two to sell it. I never went much beyond the occasional thinking stages though. The bike is just too good, and alternatives available just cannot measure up. Not even the new Blackborow long tail, which has been touted to me as something I should get by trusted friends. I just don't see it being better for me and my situation. Just storing a bigger fat bike, for instance, would cause me a LOT of trouble. So, yeah. I am sticking with the ol' dinglespeed, thank you very much!

That's all for this week. Have a great weekend and get out to ride if you can!