The Touring Series: Burgers In Nemeha

Thanks for joining me again on another adventure in "The Touring Series". This tour was dubbed the "Race Against Death Tour". This tour occurred in August of 1995. The three participants, Ryan, Troy, and your's truly, left from Cedar Falls, Iowa to try and get to Winter Park, Colorado in two weeks. Here I am reproducing the tale as it was posted on the blog in 2009. I also will add new remarks and memories where appropriate at the end of each post.

Once again, there were no cell phones, internet, social media platforms, or digital cameras in use by we tourers in 1995. I will post images where I can, but this tour wasn't well documented in images, so there probably will be very few sprinkled throughout. A modern image will be used only where it depicts things I want to clarify, like where we were in that part of the tour via a map image, or the like.

The "Touring Series" will appear every Sunday until it ends. Look for past entries by scrolling back to a previous Sunday's post, or type in "Touring Series" in the search box to find more.


Tuesday, August 8th- Barnum, Iowa: We awoke from the labors of our first day's riding to a very humid, warm, and uncomfortable morning. Having spent most of the night warding off mosquito attacks, setting up our tent, and tossing and turning trying to get comfortable in the stifling air of the enclosure, we were all a bit slow to get going. The day looked to be starting out overcast, with a heaviness from the humidity and temperature that made moving through the air seem like a greater effort than it should have been.

Once packed up, we found our way along a highway headed directly west. This road was a State highway, but seemed to have little traffic. After agreeing upon our route, Troy took the job of setting the pace once again. I found his early morning pace a bit fast, but Ryan seemed to be okay with it, so I just kept to myself and dug in. The road was mainly flat with a few rollers thrown in, but I was not fully rested from the day before and I felt tired yet.

Soon the State highway took a turn, but a county blacktop continued onward in a direction we wanted. Namely- due west! The road was a bit boring. The only thing we found that broke up the monotony was a huge grain bin that was being constructed near an intersection we passed by. The weather was clearing up and heating up. This was going to be a hot day. A hot, humid day with little to no wind. 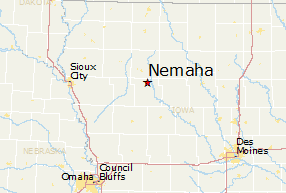 As noon approached we reached the little town of Nemeha, Iowa which was halfway to Sioux City. We were hungry and hoping for a convenience store. We turned off into the small town but were disappointed to find only a small cafe' named "Hazel's" that seemed to be run out of a residence with a "business addition" in a white clapboard building. Having no other choice, we dismounted and walked inside.

It was a small cafe' with maybe five booths, some of which hadn't seen use in a long time judging from the piles of boxes and things in their seats. We found an elderly lady there and she asked us to be seated and "What would you guys want?". We politely asked if she had any menus to look at. Instead she explained that she'd have to check and see what she had on hand to cook. She dug around and told us all she had were some hamburgers. Well.......hamburgers all around then!

As Hazel cooked up our burgers the story had to be told of what we were up to. Hazel listened and asked a few questions, marveling that we would be taking on such a challenge. She also gave us some background on her little town. As we munched our burgers, she went about doing some tidying up. Afterwards, we payed our bill, but we couldn't go until Hazel had her picture taken with all of us. We obliged her. It was a kind of quirky lunch, but I think we were amazed as much as Hazel was by each others oddness.

This was pretty much the day we went into "uncharted territory" for all three of us. The first day was like that at the end, but this entire day would be into an area we knew little about. The terrain was pretty flat, easily ridden, but equally as boring as you might imagine. Long stretches of corn and bean fields with little else to break up the monotony were the main scene on tap for this morning stretch.

Meeting Hazel was cool. We actually all enjoyed that bit. That would be, probably, the last "normal" interaction we would have with a "civilian" for the rest of the tour. Unlike the year before on the "Beg, Borrow, and Bastard Tour", we ended up speaking with a lot of adults on this tour, albeit many were unwelcome encounters!

As we left the quaint village of Nemeha, population 85 in 2010, we were hopeful of having a decent shot at getting to Sioux City, as we had already covered half the distance there already. But the weather would take a turn and we would find ourselves struggling.

Next: Superheated
Posted by Guitar Ted at 1:30 AM