The Big Fat Dummy is really an awesome idea, but fat bike wheels and tires are kind of.......well...... heavy, for one thing, and limiting for another. I mean, are you going to burn up a set of fat bike tires on pavement, or a harder surface, that you could ride a BFD on, or are you just going to stay off-pavement with it?

I'm no "insider" when it comes to what Surly does, but this new spec Big Fat Dummy makes a ton more sense to me than the fat tired version did. I don't know why they decided to roll with this, but I have opinions. With 29+ tires and wheels, the Big Fat Dummy now is more adept at everything  outside of mud and snow. Even then, 29+ would get you a long ways down the trail.

I also like the color better, but marginally so. The "military green" of the original wasn't my cup of tea, and while white bikes look stunning, they are a complete pain in the you-know-what to keep looking good. Meh! Color is subjective, I get it. So I gave a subjective opinion. Still, this gets me more excted than the original spec, and that's saying something.

Not enough for me to want to replace my Big Dummy though. Sorry Surly!

You may have seen or heard that there was an Interbike show last week. The show that used to be the focal point for the North American bicycle market has now become something of a minor event which is hardly noticed these days.

I am by no means an expert on the trade show scene, but I was at a couple Interbikes in the 1990's and then every year from 2006 to 2013. I saw what I saw. I also was witness, as were all (or most of you older folks) to what the innergoogles has done to media. That has changed to something that would have been unrecognizable to a journalist 15 years ago.

Marketing has reacted and changed along with that, so now days, nothing is the same as it was in 2006. Then it was still a show that commanded attention. The only reason it held on so long to any level of importance was that the big brands stuck with Interbike until, one by one, they all started dropping out around 2008 or so. The combination of punches that instant, easy information dissemination brought, along with content marketing, have rendered Interbike irrelevant. Companies that once relied on the audience which attended in person and the audience which was waiting on media to report for them are now using other means to reach their customers. So, in that sense, Interbike is useless.

Even the original purpose of the trade show hasn't been viable for decades. That was writing up business. This is even more unreasonable to expect today in a climate of "just in time" inventory and consumer direct sales. So, all that was left for the show to promote was the "getting together of the tribe" aspect, which, again, is rendered pretty moot by social media now days. We pretty much already know everything everybody else is up to. Oh! Wait! There were seminars too. Bah! I can't think of anything more exciting than a seminar. Wow! Why didn't I go? Seminars....... gimme a break!

So, Interbike trumped up e-bikes to the hilt, and the show was full of that. But beyond a bicycle that you have to recharge, and has a motor installed on it, the fare I saw being hawked at Interbike wasn't very impressive. Yet, you will see nary a bad word about Interbike spoken by those who attended, or were invested into it. But c'mon folks! It ain't anything like it was. Not in terms of business, impact, or attention given to it. Nothing at all. You folks at Interbike know it, and so do we all out here. It's a "dead parrot". 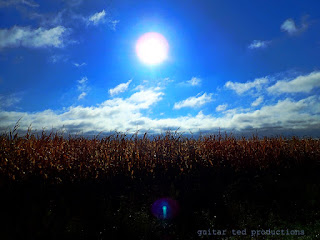 My ride back on Wednesday showed how the farmers are just getting around to the harvest. Had it not rained an insane amount Tuesday, I've no doubt that the combines would be running 24-7 in the fields right now.

The soy beans are seemingly first up this year. I saw evidence of some fields being in mid-harvest and one completely "shaven" down to the ground. It won';t be long before the landscape looks desolate once again with the barren fields all brown with stubble.

Between now and when the fields are stripped of their bounty, the farmers will be busy wheeling components and equipment around. Big semi tractor-trailers and enormous grain wagons will be cruising the Iowa countryside again, just like every year. These folk are in a big hurry too, so if you are out riding, and if you come across the big ag equipment or trucks rolling up dust, step aside and let them go by. And for heaven's sake, ride on the right side up hills. Especially now. I'd hate to hear of anyone getting smoked by an 18 wheeler or fast moving pick'em up truck.

Okay, have a great weekend and get out and ride!
Posted by Guitar Ted at 1:30 AM

Hey, why don't you tell us how you really feel about Interbike? ;)

B+ would make more sense for a dummy imo. Look at how tall that thing is! I bet it's all floppy when loaded down. Xtracycle moved to 20" rear wheels to lower the center of gravity.

I'm a member of a "i love my big dummy" group on facespace and almost every BFD picture posted the bike is unloaded. They're gimmicks, not utility bikes.

@Rainier Wolfcastle- I don''t think it has to be a problem if you load the bike correctly. Loading a bike itself is a skill that many folks aren't acquainted with.