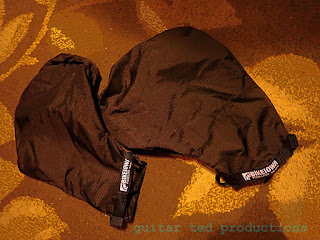 A while back I mentioned that the good folks behind Bike Iowa had sent me some of their Pogie Lites. These are basically loosely based on the traditional "pogie", or handle bar covering, which keeps wind and weather off your hands to aid in keeping warm and dry. If you care to know the origins of this sort of product, Neil Beltchenko wrote a bit about the history of this product for Bikepacker.com and you can read that HERE.

Pogies for cycling have become big, stiffer, and somewhat unwieldy in some cases, making them useful only in special situations. Bike Iowa's Scott Sumpter saw this and sought to make a pogie that would be useful in other situations than Arctic type weather. A pogie that was more wide ranging in use, one that wouldn't be cumbersome to remove during a ride, or install during a ride. A pogie for four seasons and not just for flat bar equipped bicycles. Scott had a tall order, but now offers the solution he came up with called Pogie Lites.

Made in "Central Iowa", the $75.00 Pogie Lites are shaped much like traditional pogies with a cinch strap made of webbing which is on the end with the "Bike Iowa" logo. This end goes over your controls and cinches down on your handle bar. The other opening, the wider one, has a structure sewn inside, (a wire, I'm guessing) which keeps the opening, well.......open. This is important for ingress and egress for your hands during riding. This end also features a corded closure with a toggle to tighten the cord down around your wrist. This is similar in nature to what you'd find on most sporting outerwear jackets.

Bike Iowa claims these light weight pogies fit flat bars, drop bars, or the unusual Jones Bar, of which I have examples of all three here. First up we have a traditional flat bar set up here. I used my Ti Mukluk with the Pogie Lites.

They are super easy to install. The strap on the handle bar is easily loosened to get over the controls and easily tightened to seal out cold winds and weather. The extra strapping can be lodged in the hook and through a loop sewn into the collar. I was impressed with how quickly this all went.

The structure which holds the other end open allows you to sneak your hand in and draw up the pogie over your hand. There is a bit of a learning curve to this part, but once you get the hang of it, one handed operation is easy while the other hand is on the handle bar. While riding it is easy to pull out your hand for any reason and replace it again inside of the pogie. I have to say that you become painfully aware of how often you actually do this when you get pogies of any sort. Kind of like when you start out on a fixed gear bicycle, you are reminded how much of the time you are coasting. Anyway.....

Pogie Lites live up to their name in several ways. First off, they weigh about 3 ounces. The are made of a lightweight material, although it isn't specified on their website what it is exactly. The material is very flexible and that's where the magic of these comes in at. This lightweight, flexible material allows for a few things that typical pogies for cycling do not. One is how you can operate your bicycle's controls from outside the pogie. So, for instance, let's say that you removed your hand to swipe that pesky bit of mucus dangling from your nostril and suddenly you need to brake. You can by grasping the lever from the outside of the pogie. You simply just smash the fabric around the lever and squeeze as you would anyway. It isn't ideal, obviously, but in a pinch, yeah.....it'll work.

This was very evident when I put the Pogie Lites on a set of drop bars so I could use the drops primarily. You can also put them on in the "opposite direction" so your hands would be in a primarily hoods position. But as I had them oriented, I could withdraw my hand from within the Pogie Lite and set my hands on the hoods. I could use the levers for braking and shifting, despite the fact they were covered up. Obviously, you could do this with them oriented in the other position as well, but I haven't tried them that way yet.

I also put the Pogie Lites on my Blackborow DS fat bike which has Jones carbon H-Bars. The Pogie Lites fit these bars very well and in the end, I think they actually worked the best with Jones Bars. But that was only by a slight amount. They really work great on about any bar. Well, just about any bar........

I will say that putting these on the drop bars was a challenge in the way I did it since the smaller end has to go on first, and it has to pass over the brake lever and hood. Some of these brakes with knobby hood protrusions, like SRAM Hydro levers, probably won't fit the Pogie Lites the way I had them oriented. That's only a guess right now though. We have a bike at the shop I should check this out with, but the Pogie Lites barely cleared the hoods on the Sora levers on the Breezer RADAR Expert. Obviously, they probably would be a no-go on levers with side exiting derailleur cables too. I doubt I'd like these on a Gevenalle equipped rig either. Finally, I could see where some folks just wouldn't "get it" when it comes to these as well. Like I said, there is a bit of skill involved in getting on with them and some folks just can't be arsed to figure things out. That's fine.

As far as comfort went, I kept the wind off my hands easily with the Pogie Lites. Therefore my hands were warmer. I didn't use my heavy gloves, but since the Pogie Lites are not insulated at all, I did wear some insulated gloves when I rode with temperatures varying from the teens to the 30's.

The Pogie Lites are really easy to install and remove, plus they are really very packable. You could fold them carefully and stuff them in a jersey pocket easily. Obviously there are a lot of places these could be stowed. I can see just having them along for almost any cool to cold ride in the country, for varied weather commutes, or for fat biking anytime unless it is really crazy windy, way below zero, or both. If that's the case, an insulated pogie is probably the best bet.

In the end, I think this is a very interesting, very useful product that gravel riders, commuters, racers, bike packers, or anyone that wants a bit of comfort in their cycling could make use of. It is a simple product, durable, and easy to take care of. Plus, it is made in the USA by some pretty cool folks I happen to know. That doesn't make Pogie Lites better, it's just icing on the cake, so to speak. Anyway, these are highly recommended. I like 'em.

Note: I was sent the Pogie Lites for test and review at no charge by Bike Iowa. I was not paid, nor bribed for this review, and I always strive to give my honest thoughts and opinions throughout.

Put on my order in on the 8th, no news if they shipped yet but I'm excited to give them a try!

GT - I'll be honest, it never occurred to me to install them on drop bars the way you have. I've always put them on so that my hands are in the pogies when they are on the hoods (similar to how Bar Mitts end up being installed). That way, the bug end threads right up and over the brake lever and hood. I can definitely see how they would be difficult to install the way you have pictured here.

Yep, completely "non-traditional" technique, but I wanted to see if it could work. The thing is, if you can make it work, it sets the Pogie Lites apart from anything else on the market.

Could be a big deal to anyone using drops on a single speed as well since the drops are the preferred position for climbing out of the saddle on an SS set up.

I suspect most folks will use them like you have though.