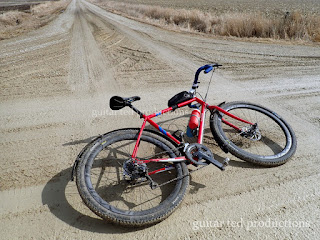 Yep! The ol' Raleigh Tamland Two again. It's been a perennial bike on the list since I got it four years ago. Only four years?

It seems like I have had this bike a lot longer than that! But after so many adventures, I suppose it does seem that way. The funny thing is, things have changed so much since then that bike came out that it is almost an antique now. That's mostly due to wheel axle standards, but still. If you cannot get good wheels for it in the future, then that about puts this bike out to pasture. Wheel standards are another whole story though......

Anyway, this bike did get tweaked again in 2018. Big surprise! The first thing was that it got a new saddle. I finally switched to a WTB Pure V on the bike and that was probably what I should have had on it forever. However; that lasted only a short time before I got a WTB Silverado in to test, and that has remained on the bike since. I also switched out the seat post again. This time for another Salsa Regulator Ti post. Love those things! I own three of them now.

Finally, I swapped out wheel sets on this bike a few times, using a carbon fiber set of Irwin Wheels with their Aon GX 35's. I settled on a set of the aluminum Irwin wheels for now though. Those a 700c hoops. I also still have the set of White Industries/WTB KOM wheels, but those are not in use at the moment.

The future for the Tamland is in doubt. I still am toying with a retirement for the frame and fork. The thing is, all wheel sets I will be needing to review/use/buy in the future probably will be through axle wheels. That makes this a hard bike for me to hang on to because I need to be having bikes that are current/forward looking in the stable here. It is a big reason why I let the Twin Six Standard Rando go early this year.

The Irwin wheels are convertible, and so that makes those swappable. Obviously the rest of the bike's components, for the most part, are easy to switch over too. I've already got my eyes open looking for a possible replacement. Maybe I'll just get the alternate color Black Mountain Cycles MCD.......

What options do you see for singlespeeders in the thru-axle future?

@Skidmark- Well, there have already been swinging drop outs (Alternator, similar other types), and sliding drop outs (Trek Stranglehold, Paragon Machine Works), that accept through axles. I suppose EBB's will become more prevalent (Tumbleweed Prospector) and don't forget "through-bolt" types such as what Surly uses. So the future is (literally) now when it comes to this.

Lot of good equipment out there on outdated equipment/wheels. Keep that favorite bike rollin'
john

I have been considering replacing my Tamland with a new Tamland. Third bottle cage mount, carbon fork, thru axle (though the 15mm front is non-ideal)...