Rear View '18: The Winter That Came And Went 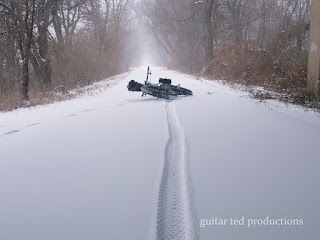 We'd get tracks beat in on the trails, everything would be great for a day, maybe two, then poof! Craptastic conditions would return and fat biking suffered because of it. That didn't mean that I didn't have fun on my fat bikes. I did. Most of the time it wasn't on packed in trails is all. I had to get creative and find my own adventures.

Much of the time these rides were commutes to work and back. I had to get in whatever snow riding I could when I could get it. Otherwise it would be melting, a mess, and fat biking wasn't really any fun at all.

I'll get more into how the bikes did in my "Bikes of 2018" series, but I happen to have two main fat bikes I use most often. The Ti Muk and the Blackborow. Both got time last Winter, but I seem to have used the Blackborow most during January and February.

I sure wished we would have gotten some extended time on trails but it wasn't to be. Eventually the warm spells got nice enough I drug out the gravel bike and the fat bikes got shunted to the back of the line. Yet the sporadic snows continued off and on right up until two weeks before the last Trans Iowa happened.

Speaking of Trans Iowa, of course I was in the planning stages for what I knew would be the very last Trans Iowa. There were a few details about the event that I was hammering through back at the time of these fat bike rides. One was that I really didn't like last  second drops. It was painfully obvious that right before T.I.v13 the forecast for the weekend was a bit off-putting to several riders. Like about 20 of them. That got under my skin after several years of having 2-4 no shows and drops stopping well before the event. A few extra cue sheet sets and hand decorated numbers were no big deal, but 20?

I didn't want that to happen again. The other thing was the cue sheet hand up at the start line. I was a bit stressed out about how that would go. But in the end it was a brilliant decision. I will always say that is perhaps my biggest regret about Trans Iowa- that I didn't figure that out years ago.

Stay tuned for more "Rear View '18" posts throughout December.
Posted by Guitar Ted at 1:30 AM