The beginnings of Winter here looked promising after a knid of early snow, but then it got warmer. Then it never really snowed here again. That big storm went South of us a couple of weeks back, and the latest one went waaaaay South of us! This has resulted in frozen grounds with almost zero snow.

Frozen into "Brown Season" is what it is here. The other unique part of this early Winter is that just before freezing this area was flooded. That has made for some very unusual conditions out on the trails. I had experienced some of this while testing the Breezer I have here to check out, but Saturday I saw first hand what it is like in the Green Belt, which was recently cleared out by the City of Waterloo. (Thank you!)

Saturday morning there was a gravel ride a bunch of folks went on, but since my hours have been reduced severely at the shop, I have to be very careful about spending money these days. Anyway, that meant I stayed home and did other things around the house and with the family until later into the afternoon when Mrs. Guitar Ted basically chased me out of the house to get a ride in.

I am so glad that she did that!

The weather was pretty tranquil. Hardly any wind and the skies were dull and grey for almost the entire day. That is until I decided to get out and ride. Then the clouds began to part, and the Westering Sun was promising a pretty cool light show to end the day with. I was stoked and I knew just where I wanted to be when things got started.

First I rode out trough the tiny bit of trail from Fletcher Avenue to Ansborough Avenue along the Black Hawk. This area got rearranged a bit near to Ansborough and there will have to be a bit of a re-route done to get folks through here anymore. That or the City will have to put in some rip-rap or some barrier to the creek from cutting the bank in further toward the backwater pond adjacent to the North. There isn't much separating the two at the moment!

What was interesting is that now there is a LOT of sand piled up in almost wavelike forms in this section. The late flooding, and with no time after to dry, has left this sand very firm. Usually this river sand is so fine you cannot get flotation on it with a fat bike. It just pushes away from your tires. But with all that frozen moisture in that sand, you can ride on it very easily. It was fun to navigate, actually, and I found a good temporary work-around here.

Then I headed out to the Green Belt proper and found that everything had been cleared as far as downed trees and limbs. That was great to see. There had been a "Wednesday Night Fat Bike Ride" out there, maybe two of them, and I could see the tracks which had made a good base to ride in. Well, that is until I came across the absolutely changed section by the dike near to the creek where we used to have the deep channel I would scramble through.

That had been there for at least 30 years, as far as I can remember back to the 80's. This latest round of flooding, with the aid of the City Of Waterloo's clearing out of every root and tree that used to hang on to the soil here, has forever changed up this section. The main point being that now we have no clear way to get from one side of the drainage to the other. Hopefully the Parks and Rec has a plan for this, or we mtb'ers will figure it out for them!

Anyway, after this was crossed I did a bit of the trail South until I figured I'd better get back to the lake for the sure to be good show the Sun was about to put on. I didn't want to miss that! So I high-tailed it back North again and over on the cut-off trail to that lake.

This lake, the trail, and the way the Sun sets for a large portion of the season, aligns up very well for great views from the Northeast shoreline. That just happens to be a place where the trail sits high enough above the water, and close enough, that the views, generally speaking, almost never disappoint.

After just standing there and soaking it in for a few minutes, I then had the urge to do some more image taking. It was fun as I hurriedly looked for things to shoot in the quickly changing light conditions of Sunset. While I am no camera talent, I think these following images are pretty good......for a hack like me! FYI: Taken with my trusty Olympus TG-Tough 4. 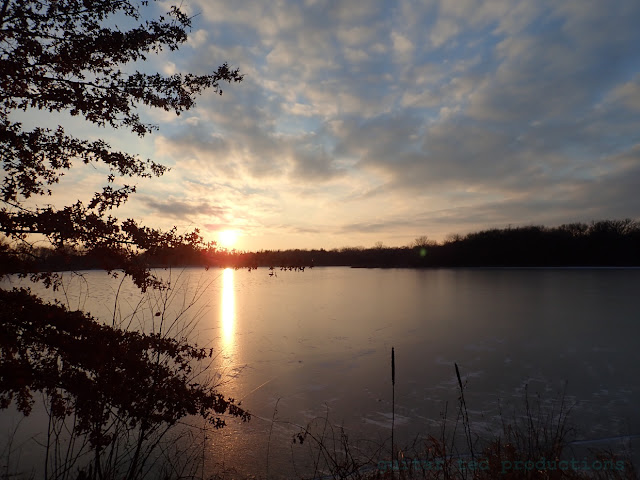 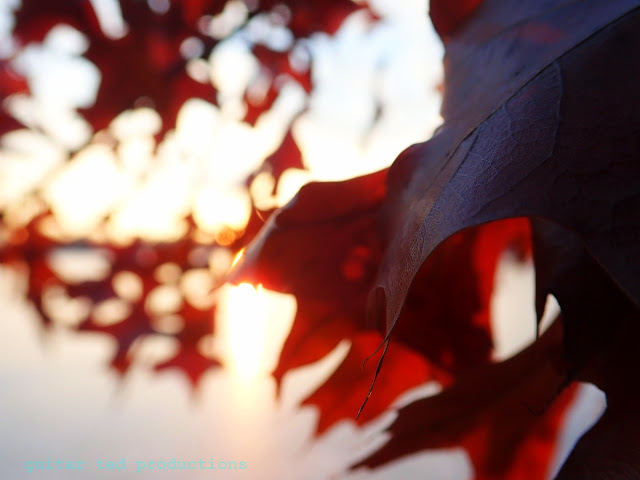 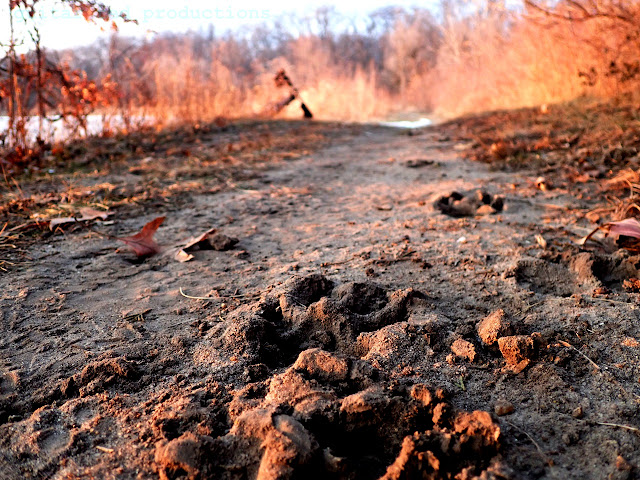 The TG-4 has a cool feature called "Microscope" which is a setting that allows you to get the camera to focus very closely upon an object and get great detail. Those last two shots feature the results of that. The last image is of frozen dog tracks in the mud of the trail. I was down on my belly taking that one!

Well, all that fun and enjoyment had to end at some point. I decided that getting back to the house with at least some light in the sky was a better deal than going back in complete darkness, so I cut the shooting short and headed back to the house. It was a great little ride though while it lasted, and I even got to see about five or six deer right after I left the lake.

I guess one of the main things I took away from this ride was that despite it being devoid of snow out there, you can still find beauty in the Brown Season when you look for it and the conditions are right. I was very grateful that Mrs. Guitar Ted chased me out of the house for this ride. She's pretty good at reading me, ya know......

Anyway, it was all too good not to share, so I hope you all enjoyed the views.
Posted by Guitar Ted at 1:30 AM

Finding the beauty in the Brown Season. Very nice! Thanks!

Tubes or no tubes for winter fat biking? If tubes, thick or thin? This also, reminds me of another odd question: thick case tire with thin tube or vice versa for rocky insanity?
Wilson

@teamdarb- Tubes for me because maintaining a tubeless fat bike set up throughout the 7-8 months of the year I don't really ride the three I have doesn't make sense.

Type of Tubes- Whatever falls to hand. As a shop mechanic, you'd be surprised to know how many riders that get fat bike tire flats and don't keep their old tubes, which most of the time, only require a patch to repair. (Note- The shop doesn't patch tires due to potential unreliability issues)Anyway, I cannot see wating them by recycling them. So I keep whatever they are, patch them, (assuming my responsibility myself) and use them. Some are thick- some not.

I ALWAYS use talcum powder in fat bike tubes to allow the tube to move slightly against the tire. This allows for a better ride feel, slight reduction in rolling resistance, and aids in removal of the tube should I need to do that.

I have no issues with rocks here, so that I cannot address, but I tend toward the 45NRTH and Surly products for tires. That said, the Terrene Cake Eater is on my list of tires to try soon.

...and that is precisely how I obtain my fatbike tubes, for the same reasoning. We shop mechanics aren't millionaires and a small perk is still a perk. :)