Introducing The Ergon BC3 Backpack 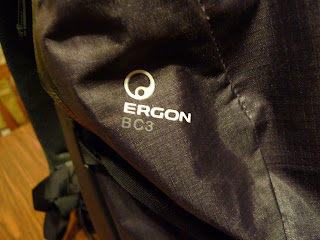 <===What it is.
Well, just the other day I had an on-line chat with Mr. 24 and he said he wanted to send out a pack for me to try out. Previously I have been using the BD2, and while it was a great pack, it was "having a few issues". Anyway, what do you expect after the sort of abuse I put that poor thing through!
At any rate, here is the replacement. the BC3. It is a BIG pack. How big? Twice as big as the BD2 in capacity! Yeah, you could live inside of this thing. Or as J-Kove would say, "Small furry creatures can get lost in there." Yes, it has capacity, but that isn't the whole story here. No, this thing is in a whole 'nuther realm from the BD2. 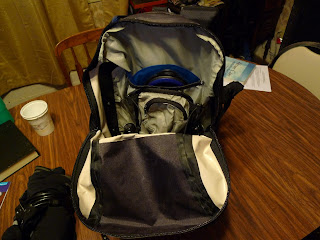 <===While it can swallow alot, it is easy to get at it all.
The BC3 has a much better inner layout than my old BD2 had. Getting into the pack is simple. Zip down the big, meaty, water shielded zippers on either side and the pack opens like a clam shell. You can get at things in the smaller pockets really easily, and the bottom of the pack is in plain view. There are great places to store multi tools, pumps, and whatever smaller items you don't want bouncing around in the larger space, which is cavernous, by the way.
Plus, there is a little water resistant pouch at the very top of the bag, along with a zippered slit that resides just at the place where the pack ends and the space between it and the harness is. Kind of a vertically oriented pocket that you can access while you ride. A great place for nutritional items, small cameras, maps, or what have you.
With a pouch for a bladder of your choice, this is easily turned into a hydration pack. (Note my blue bladder in the pic above) My 100 oz bladder slid in with no issues and routed out the top and the hose went through the included loops on the shoulder straps right where I needed it to be. In fact, it went in better than it did in my BD2. This pack could easily hold three bladders in the main interior pocket, by the way. If you are thinking about being a cycling version of a camel, that is.
Finally, if you can not get it inside, (unlikely), the outside has a flap secured by straps that a helmet could be easily lashed in, or a jacket, or what have you. For instance, I dumped the entire contents of my messenger bag into the main interior area of the BC3 and lashed the rolled up messenger bag in the outer "helmet pocket". (I still had room inside to spare!)
The fit of the BC3 is far improved over the BD2 I had. It stays off the back better, and the Flink system works even better, if that is possible. I rode home with my load, and was far more comfortable than I was with the old messenger bag. Amazingly, I had the thing loaded down pretty heavy, but I wasn't feeling it much at all due to the load dispersing attributes of the Ergon design. Nice!
But the nicest part of all? It has the entire outer surface done up in water proof fabric which includes sealed zippers. Ergon says this: The BC3 utilizes a high-tech, heavy-duty water proof material (water proofed on both sides). We'll see about the water proofness later after I've used it awhile, but I like this feature.
The entire pack is "Kerkove Nation Black" (I still think Ergon should call it that!) and is pretty stealth. The straps are padded nicely, but don't pinch or restrict your movement, and are adjustable with no fuss. I had the pack fitted in five minutes and was off.
Okay, so now it is time to put this pack through its paces. I'll be wearing it many places, so if you see me about, ask to see it, or ask any questions about it. I'll do what I can to answer. I'm pretty stoked about the possibilities for this pack, and I see it as an opportunity to do some adventures. Ergon says it is even good for commuting. Hey! I do that! So stay tuned!
Thanks to Jeff Kerkove, Ergon U.S.A. and everyone associated with Ergon. (Yes, that means you too Jeffrey N.!)
Posted by Guitar Ted at 1:00 AM

do you still like this bag? I'm strongly considering it for doing the 2010 Tour Divide race.

@Devian: Yes, I still do like it, but it is huge! For most of my needs, it is too much. I can certainly see how a Tour Divide guy would dig it though.

The pack stands off your back slightly and the pivoting harness really works. I think the heavier the load gets, the better it works for sure.