Bike Shop Horrors: Got It Backwards 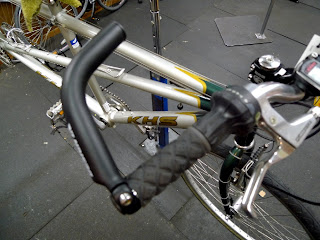 <===Prepared for the core sample on your command, Captain!

Moots never intended for this to happen, I am sure of it. Back in the '80's when the original "bar end" was made, it wasn't even mounted on the handle bar ends, but nearer to the center, and they pointed frontwards and slightly up. They were climbing aids.

The idea caught on and the "bar end" became a fashion accessory for XC oriented mountain bike rigs of the 90's. Then the average cyclist got ahold of these things and were convinced that they were band aids for poor fitness, poor bike fit, or both. What happened then was that I see things like this on a regular basis.

You can't tell them they are wrong either. No, no. They won't even listen to you. I sure hope they never break their ribs. That's all I gotta say about that. 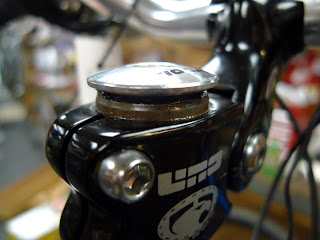 Same bike. Had a really loose head set. Got to looking and hey! Whatta ya know.

Yeah, and this was on a tandem. Not a good thing either. Well, obviously a head set spacer and adjustment was in order. At least the head tube wasn't ovalized.

Sometimes I wonder why more folks don't get seriously injured. I really do.

Be careful out there folks.
Posted by Guitar Ted at 1:00 AM