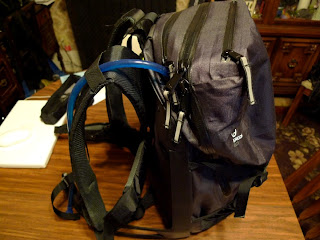 I've got some more to say about this pack. It is just too good not to....

Okay, I haven't had a chance to do any single track with this pack yet, but I am totally impressed. Ergon upped their game with this thing.

While it is huge inside, it rides like the BD2 I had as far as how it feels off the back. The air flow is better around the back, and the Flink rocks....literally! It allows the pack to stay put while you move. I can't wait to do an adventure with this thing. That's probably the coolest thing about it so far. It has me scheming to do something. I don't quite know what yet, but I have a few ideas! 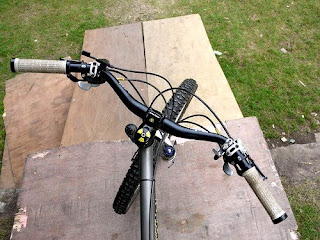 <===Carnegie's Bar? Yep! A real bar in Taiwan inspired the name of this...

Got wind of this new bar today from Ragley Bikes designer Brant Richards. It is sorta "Mary-like" in a "Fleegle" kind of way, if ya catch my drift.

Anyway, it will be available immediately from Ragley Bikes and you can expect to pay about $60.00 plus shipping from the U.K.

The story is up on Twenty Nine Inches. Suffice it to say that I really like it. I miss the old Space Bar I used to use, but can't anymore, since it was discovered it was too weak for off road use. I'll have more on this Carnegie's bar soon. Stay tuned.......

Yes! A new Trans Iowa header by Jeff Kerkove! I am super stoked to continue to have Jeff involved in Trans Iowa, even if it is only from the design of the site standpoint. I know if it wouldn't have been for his vision and energy, Trans Iowa wouldn't have ever happened. So, thanks to Jeff for the past efforts and for continuing to be involved with this little gravel dust up we call Trans Iowa.

Now, as for the event, the next big dealio will be the Registration! Look for an announcement in late October/early November. We'll do the veterans first and rookies second, like the last two years, and all by post cards. Get yer drawing skilz on and make your own post card! It doesn't guarantee entry, but it makes life more fun for d.p. and I, that's for sure!

Sometime in the next month or two, look for a recon report to pop up. I have the route pretty much planned, but as most that follow this event know, there are always changes to the original plan! I am looking for about a 320-ish mile course. Depending on how tough d.p. and I think it is will shape how long we give you all to do it in, but figure on at least 32 hours.

We've got tweaks and plans that will all be announced in the coming months. Stay Tuned!

For now, we still have a bit of summer left, so get out and ride them thar bikes around, ya'all!
Posted by Guitar Ted at 1:00 AM