Sunday way before dawn I arose and collected Jeremy from his abode to hit the gravels and see what I had come up with for a course for the next Trans Iowa. Following is the story on the day, and some glimpses into what the course may hold in store for those intrepid T.I.V9 cyclists next April.

The plan was to drive a large loop that would start with parts of the course that would come later, then skip over a section of territory to the beginning of the course in Grinnell, and drive back on course to a point that was closest to home and return for the day. Jeremy was to be my note taker/navigator, and I was helping to look out for signage and ascertain how the course was going to be for difficulty, which will affect the time cut offs.

We got to the point on the course we wanted to start at while it was still dark. Signs were hard to read, as the reflective material was sometimes weathered to the point that the letters and numbers looked like something other than what they were. The air was below freezing, and in the light of the headlights, I could see the fields were covered in frost. Still, it looked like it would be a great day with clear skies and little wind. 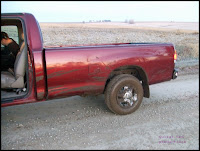 We didn't get 25 miles into the recon before I found mud. I was pretty familiar with where we were going, and I asked Jeremy, "Hey, shouldn't we be coming up on that B Road soon?", and he answered immediately that we should be on it now. I looked up, a bit alarmed, and sure enough, the gravel was thinning out, and next thing we know, we're in it. I was a bit perplexed because I didn't see the typical warning sign. But the road looked okay, so we forged onward.

The roads that are unpaved can sometimes look okay, but I've been around on these long enough to know that because B Roads follow the land's contours, when the road goes downward, it usually isn't a good thing. Once again, my theories on B Roads were proven more correct. The road we were on went down, and of course, at the bottom was a mud hole. I punched the accelerator, Jeremy grabbed the "oh shit!" handles, and I plunged in.

The mud flew, the engine roared, and the ol' Tundra pulled through. Whew! That was close!

As if that wasn't enough, I drove Jeremy down another B Road later on. I didn't think this one would be as long as it was, but yeah.....it went down again!

And it was a good thing we traveled in the direction that we did. The side we descended was slippery, very steep, and wet. Going up was drier, and just as steep, but there was traction.

I feathered the accelerator and gave it just enough goose to get the job done. Good thing the Tundra has a towing package, since I put that low end torque to the test on that climb!

Checkpoint Alpha was checked out, and I was pretty pleased with the layout. There is a small park we'll be using to do our deeds in and it has a shelter house, a Coke machine, and a permanently installed porta-jon. (I know. So ironic!) It'll be just perfect for what we'll be doing though.  Oh yeah....Checkpoint Alpha is 52 miles into the event, in case you were wondering. We left there and motored onward to check out some other stuff.


The course is looking pretty good. It will be brutal in spots, but in others, (weather dependent), it will be nice riding with great views.

The gravel roads are in a state of repair after a long, very dry, and hot summer. This has caused the counties to lay down a lot of chunky, fresh gravel. Typical for what I have seen all late Summer and Fall so far here. Depending upon what Winter will bring, we may be looking at some chunky roads next spring again.

Right now I have 170 plus miles verified, documented, and waiting to be cue sheeted. The plan is to get out there and do the rest, (approximately 150 miles), in one fell swoop, which would conclude the recon for this course. Then it would go to cue sheet proofs, and those would be double checked in the spring again.

It looks as though I won't be needing to include a "Secret Checkpoint" either. Convenience stores will be spread throughout the course, and there will be more available on next year's course than last Spring's event had available.

Okay, so that's a wrap for this report. Hopefully I can get the rest knocked out soon, and we can focus on cue sheet production soon. Stay tuned.........

"Convenience stores will be spread throughout the course, and there will be more available on next year's course than last Spring's event had available."


I've got to admit, I had to chuckle reading this. I vaguely remember at checkpoint 2 "theres a guy with some donuts and bananas up ahead, otherwise nuthin' between here and the finish" um....nuthin'??? "Nope, nuthin" Um....Okay....maybe this is a good time to call it a day LOL.

@Joe Frost: Well, "Nuthin" was really dis-information that you got, unfortunately. In reality, in another 70 miles you would have run across several convenience store opportunities in Pella, and another just off the course with about 50 miles to go. The thing was that the stretch from Agency to Pella was over 100 miles, so we stuck the "Secret Checkpoint" in there to help shore up the lack of a re-supply opportunity.