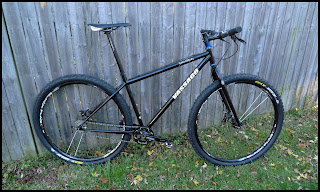 Well, this ended up becoming a failure. I had to use a blue Chris King head set. Bah!

Oh well, at least it is finished, and I have test ridden it around the house a couple of times. I think it should stay together! At least it felt like it should. The thing is, single speeds are almost too easy to set up, so I sometimes don't pay as much attention to detail on my own bikes when I build them up. Fortunately, I did happen to check all the bolts before I rode it! I'll just leave it at that. And the brakes actually work, which is a whole chapter unto itself. I won't get into that here.

So, without further adieu, here is the build list, which is listed in no particular order. Let's see here...
Did I miss anything? I don't think so. Well, that should cover it. It all adds up to 22lbs, ready to ride. I could knock this build down a bit further in weight without too much trouble too. I'm sure many of you can see where. 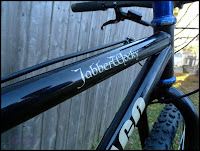 I've only ever tooled down the road briefly on a Vassago once before which belonged to Captain Bob, (ironically enough, as that's who I got this one from), so I didn't have a very good idea of what to expect here. Once I got some components bolted to the frame, however, it quickly became apparent that this was a light frame. The build was going to end up being light, and it did go that way.

The "Wet Cat" geometry thing is definitely odd. Well- I should say it isn't so much the numbers, but the way it was laid out here which is weird compared to some bikes. For instance, the seat tube is a bit short for the top tube's effective length. In that way it really reminds me of the first Raleigh XXIX. (Thus the 400mm Thomson post, which this short seat tube made necessary.)  Secondly, that "shortness" carries over to the shorter head tube on this frame. The top tube/down tube junction here looks like it is from a small sized bike, like a 16"er or even smaller. Odd layout, to be sure. 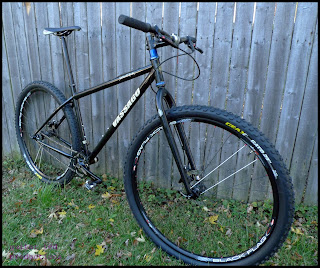 Otherwise what you have here is a lower bottom bracket, a (for its time), slacker head angle, (although now it is right in the ball park with everyone elses stuff), and a bit long-ish chain stay length. Nothing too unusual there, but when it came out, it definitely was oddball geometry.

Although the bike is complete, here are a few things I may be swapping out in the future.

The Fork: The front fork has 44mm of offset. With the slack-ish head angle, it may be too slow for my tastes. I can put on a 47mm offset fork, and that is an On One Carbon Superlight fork. So it would get the weight down even further as well. Plus, that fork is black, (but not all black), so it would fit the theme here.

Head Set Spacers/Stem/Handle Bar: I have to figure out where I want the bars to end up  here. It's close, but things might change. The best bet is that a wider and a bit more compliant handle bar like the Whammy Bar may end up on here.

Gearing: Obviously, I have a low gear on here. Somewhere I have an 18T Misfit Psycles aluminum cog, or perhaps I'll get something new and similar to that. But maybe I won't. Depends if I decide I really like the bike or not. For now it is rideable, so I will live with that gear for now.

Okay, that's it for now. I'll be back after some riding to update on this Project bike.
Posted by Guitar Ted at 1:30 AM

I digs it,GT,makes me miss my (very) green and white Jabber even more :p

Cool bike. Interested to hear your thoughts on the geo after a few trail rides. Any update on the El Mariachi build?

@Rob: The El Mar is as I remembered it, but for a full on report, I will make an update on the bike soon. Short version: I like it.

Nice GT.
I have the Bandersnatch version and can validate your thoughts on fork offset. Started with and older 38mm Reba which was flexy with terrible flop in the front even with a short stem and dropping to 80mm. Now with a 46mm Reba and much better. Would love to try a 51mm for curiosity.
Run the bike with a longer stem and the long chain stays really do make it a climbing machine.
Happy riding.
BR

I have a 22" jabberwocky with the ODIS fork. Love the bike. I like the bars a bit higher because I feel more comfortable climbing that way.