Hmmm......rather chilly weather has arrived now. Fall? Could be, but there is still time for a warm spell to strike. We'll see.... In the meantime, it was in the upper 40's when I awoke yesterday. That's a far cry from last week's hot, humid weather.

I was rested and ready though. I had dug out my knickers, wool socks, and a wool cycling jersey. I was warm as I was starting out for the meeting place. I was expecting a couple of riders for sure, and maybe two others. Mike and Craig were confirmed, but maybe Dave from last week, or Brian, or Tony would show up. Maybe.

Turns out the Craig was at the lot already when I had gotten there. We chatted as he pulled his rig out and started kitting up. The phone rang and it was Mike. Running late, was the word, but he would meet us North of town. Craig and I waited a minute or two past the start time, but no one else showed up. Guess it would be a trio then. 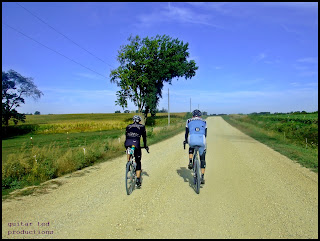 The wind was out of the South at the start, but wasn't too big of a deal. However; it was increasing in intensity as we rode along, which we didn't notice at first, as we were motoring on Northward. That left turn West made us acutely aware of it though, and suddenly the trip back around the other side of the loop loomed larger.

There were a lot of wispy clouds in the sky, and a lot of jet contrails. Iowa is underneath a lot of flight paths for commercial and military flights, so this isn't unusual. The past observance of Patriot Day, (9-11), reminded me of that time when there were no airplane flights allowed. The skies were brilliant blue for several days then, and I remember how odd it was to not see the streaks of white in the sky. A throwback to a time I am unfamiliar with, and likely not to witness again in my lifetime.

We were also seeing a ton of car traffic on this particular 3GR. I figure that we had more cars and trucks on this single ride than we have had in all the other 3GR's this year combined. I cannot pinpoint why this would be, but all of us noted it and were puzzled. Even the blacktop highways we crossed seemed to be teaming with car and truck traffic.

When we turned South it was apparent that the wind was a factor now. Not much coasting down the backside of the rollers, and with the wash-boarded road we were hitting, climbing up the rollers was harder into this wind.

I don't know why, but lately I have come to attack this part of the course. I buckled down and cranked up the first roller and I ended up out front. I could still hear Mike and Craig chatting though, and as I was going into the wind, I knew that they had to be right there behind me.

Then another roller. Their chatting grew less easy to hear. I am not sure if it was that big of a deal, since Mike and Craig could have powered away from me at any point they wanted to, but once I crested the tallest roller and hit the longer down hill section, I turned and could not see them behind me, at least not very close behind me. I cranked along a bit more, then as the corner drew nigh, I sat up. Mike rolled up just then, and in a bit of a snarky tone exclaimed, "You like that section, don't you?" I suppose it shows!

Mike usually diverts back home from this point, but he continued on with us as his wife was out of town and he didn't have a pressing schedule. It was nice to have him continue on through the entire course with us.

Along the way we came up with an idea, (which I will share in detail later), and we didn't say much going Southward due to the now increased wind. It had ratcheted up even more and we were pushing harder just to crest the rollers and keep up the pace as best we could.

Once we got back to the parking lot we chatted for a bit and then I swung a leg over my Black Mountain Cycles bike and cruised slowly back home. I was tired, hungry, and dirty, but it was a great ride, and the day turned out to be a gloriously warm, sunny, albeit windy one. I got home and found that a dragonfly Mike had pointed out to me on my knee at the parking lot had gotten a free ride all the way home. I kicked him off outside and went in to say hello to my waiting family.
Posted by Guitar Ted at 1:30 AM